The IoT M2M Cookbook contains a simulation of a dual F antenna for cellular. This antenna has been customized several times by customers, or by us on behalf of customers. The Gillette order button using this base design and described in the book supports NB-IoT, LTE-M and GSM from about 750 MHz with 960 MHz and from 1750 to app. 2000 MHz. 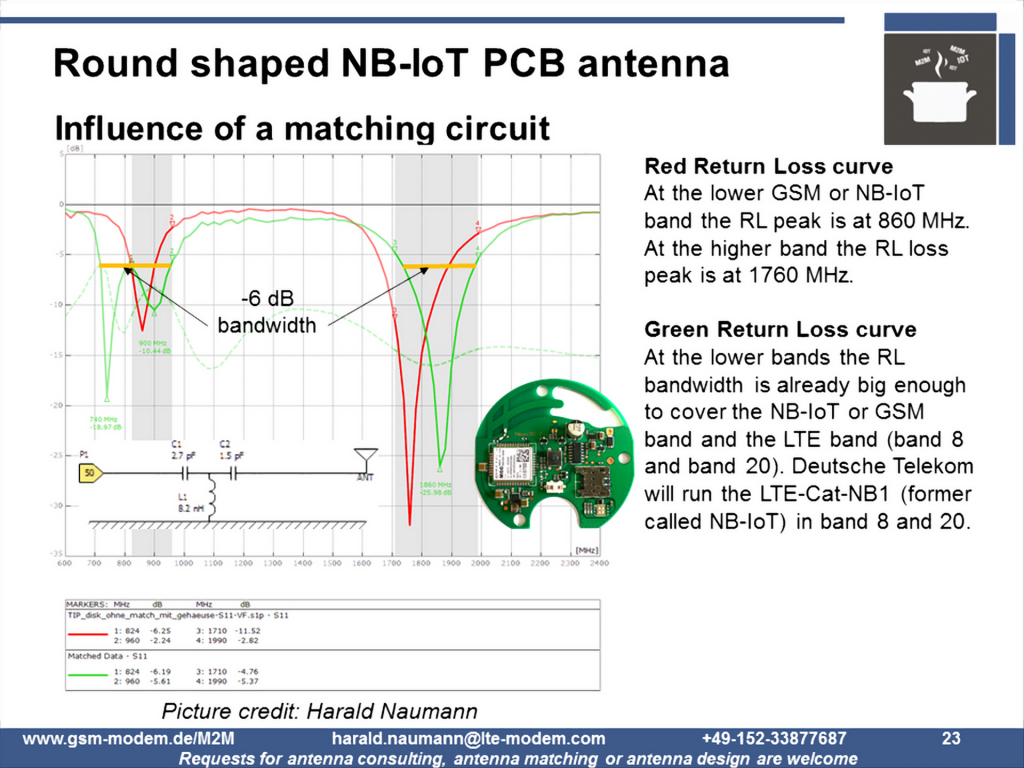 The most economical antenna development is often based on the dual F antenna described in the IoT M2M Cookbook. The two antenna arms work independently of each other. This can be clearly seen in the different versions in the antenna simulation. The two arms allow the combination of NB-IoT / LTE-M (SubGHz) with BLE / WiFi or the combination of NB-IoT / LTE-M with GNSS. For example, these combinations are used in low-cost trackers, celluar/BLE gateways or in waterproof sensors.

By following the link below you will find some references for antenna matching, measurements for the evaluation of antennas and development of antennas based on various techniques. http://www.gsm-modem.de/M2M/antenna-test/lpwan-antenna-nb-iot-lte-gps-lora-sigfox/

Extract of services:
– Matching of the antenna in the device (chip, PCB antenna, helical antenna)
– Guidance on antenna design if undertaken by the client
– Antenna layout of the dual F-antenna on an empty PCB in the customer’s enclosure
– Antenna layout of any other custom PCB antenna: Helix antenna, Flex PCB antenna, Antenna punched from tinplate, Antenna printed on plastic in housing, Antenna on ceramic, Slot antennas and many more techniques
– Antenna with radio module and power supply for extremely low power consumption
– Assisting in the implementation of the antenna or power supply concept in the fully-featured PCB of the customer
– Development of the whole PCB including antenna with software Development by the customer
– Development of the whole device (HW + SW) following the client’s specifications
– Reference designs with NB-IoT, LTE-M, GSM, GNSS, BLE, Wi-Fi, MCU, sensors, charging electronics for over 20 applications with an open block diagram and the possibility for customers to develop their own code using a free C compiler
– Preliminary measurements and tests required for radio certification
– Radio certification according to RED (CE), FCC and several more standards
– Workshops at the client’s office or via video conference
– Training and seminars on radio technology and radio certification