The device under test is a PCB of size of 40 mm x 20 mm with GNSS antenna for a small tracking device. Small mobile GSM / GPS trackers are common for pets, humans or assets. Chip antennas operate as loop antennas which are magnetic antennas and are usually unaffected by being near to the body. If the PCB is touched or some objects come close to the antenna, the centre frequency of the antenna will not be de-tuned. 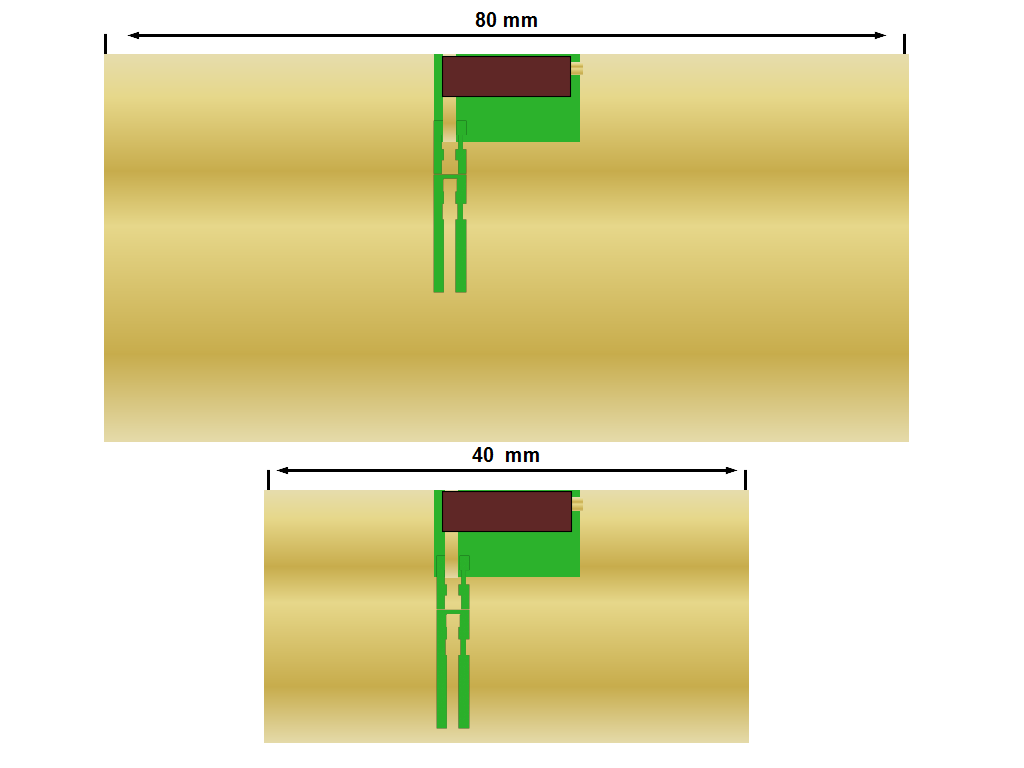 The upper graphic shows a GPS chip loop antenna on 80 mm and 40 mm long ground plane. Please note that the size of the GPS chip antenna is not to scale. The data sheets often specify the gain and Return Loss for 80 mm only. If you use a 40 mm long PCB instead of a 80 mm long PCB you will lose gain and bandwidth. If the bandwidth at 80 mm size is already at the edge then at 40 mm size it will be too small. If you move the antenna away from the centre of the 80 mm or 40 mm to the left or right side you will decrease gain as well.

According to the data sheet the selected antenna is suitable for GPS. The planned GNSS module is supporting GPS with a bandwidth of 1563 MHz to 1587 MHz and Glonass with a bandwidth from 1597 MHz to 1610 MHz. Since the two GNSS bands are so close together, you can specify it as a frequency band of 1587 MHz to 1610 MHz. The additional graphs show the same GPS antenna with a simulation of different matching circuits. 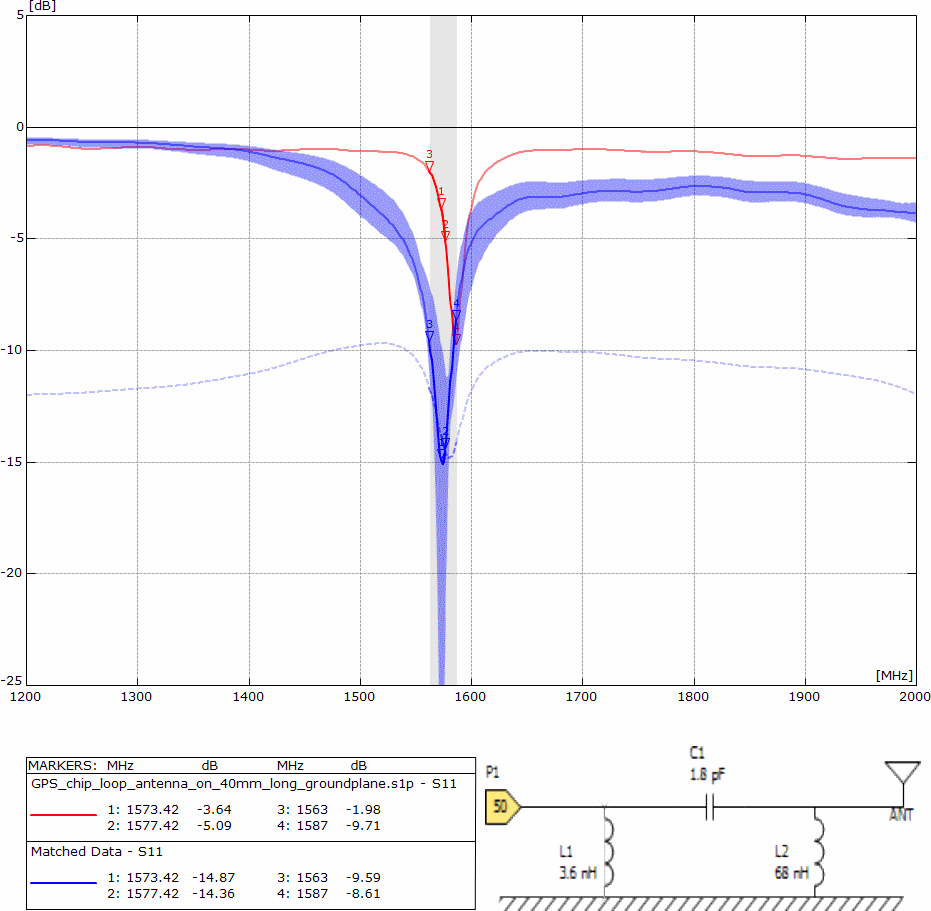 The red curve shows the GPS chip antenna unmatched on the PCB. The Return Loss peak at marker 4 shows -9.71 dB at 1597 MHz. 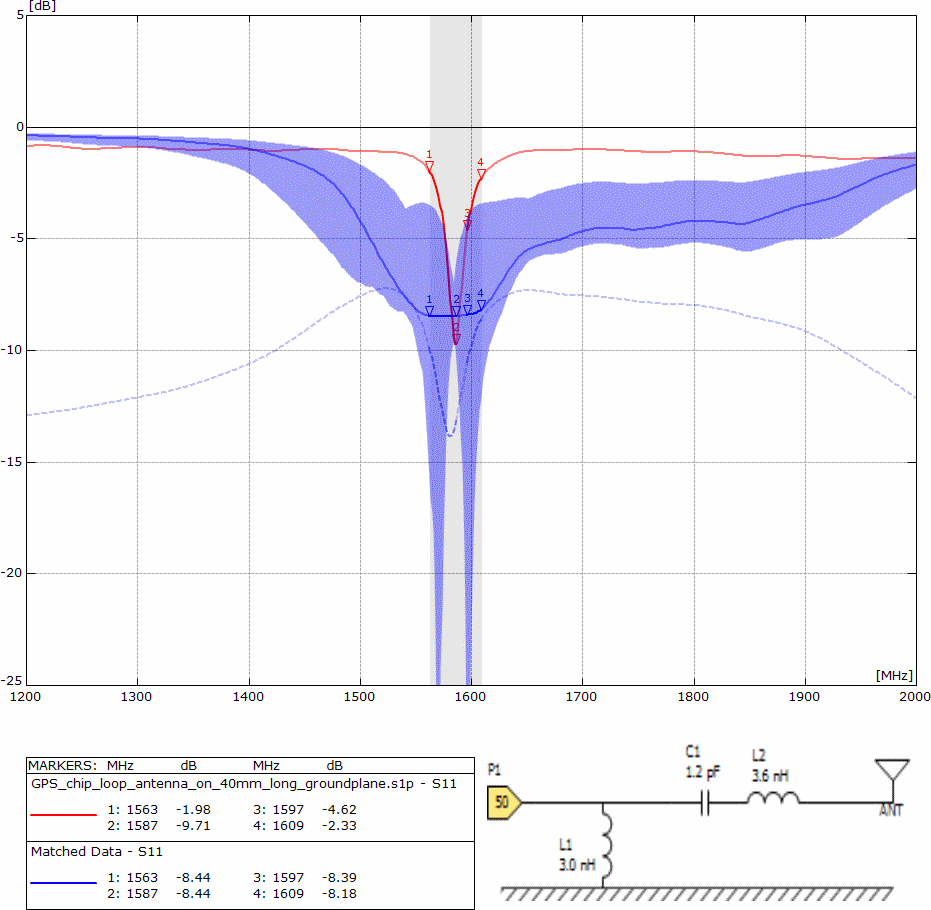 The blue matched shows the chip antenna matched with 3 parts in L circuit. The light blue curve of the simulation shows the tolerances of the components makes this matching proposal useless. Moreover, the antenna has a Return Loss of less than -4 dB at the GSM 1800 / 1900 MHz band. The transmitter of the GSM module will block the GPS module for sure. A smaller GNSS bandwidth will avoid this problem or at least reduce it. 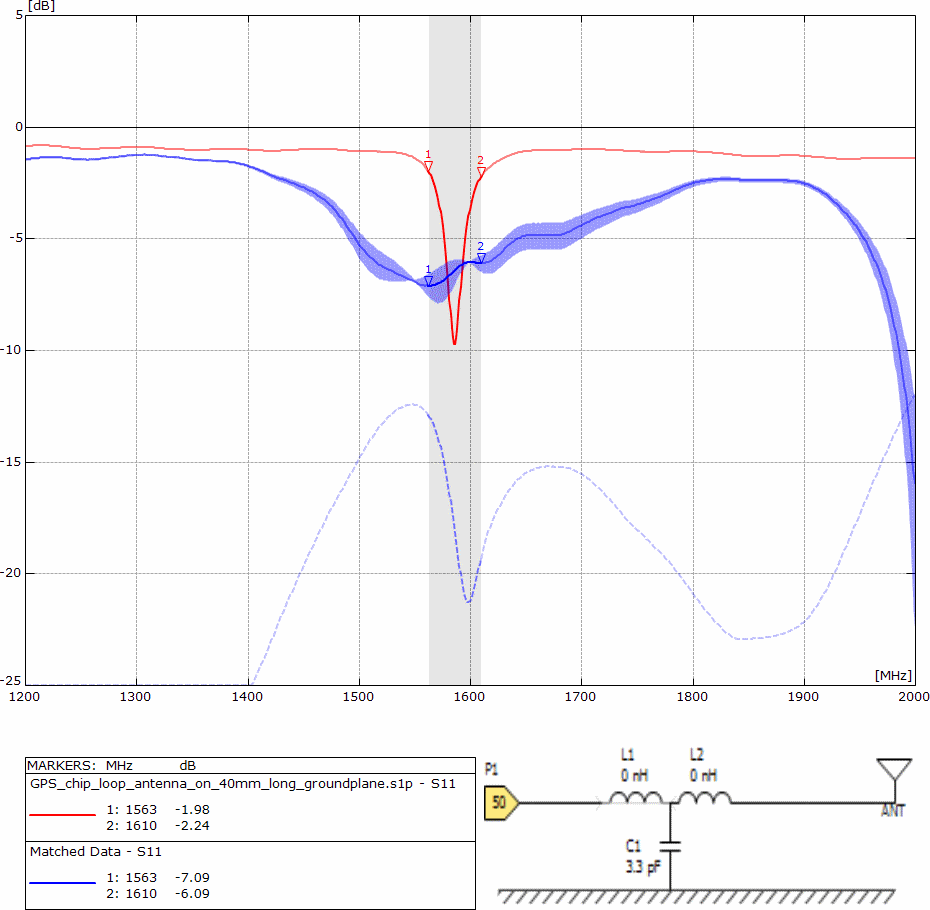 In this simulation the GPS band and Glonass band is already merged together from 1587 MHz to 1610 MHz. Even with the tolerances of the components the Return Loss is lower than -6 dB. The reason for the low tolerances is related to the capacitor of 3.3 pF to ground. If a matching circuit has fewer components the summary of all tolerances will be better as well. However, this plot shows a resonance at 2000 MHz and will may cause trouble at GSM 1900 and UMTS 2100.

The DUT has failed the test in several times. For GPS only the chip antenna is maybe okay, but other chip antennas will show a better result. For GPS plus Glonass, the antenna is not useful, because the Return Loss at the edges does not reach -10 dB. With tolerances the Return Loss will be worst case -4 dB at the edges only. Furthermore the Return Loss gets low at the cellular bands GSM 1800 and GSM 1900 as well. On GSM 1800 and GSM 1900 we have 1 Watt (30 dBm) power during transmit. The GNSS module will receive a high power peak and may be jammed.

For small devices like tiny trackers or Bluetooth wearables it is highly recommended to select and to test the chip antennas in beginning of the development including enclosure and battery. If the antenna will not pass this first test then you can stop your design to avoid misleading and faults during operation.

The DUT under tests has shown that there is a desperate need for antenna pre-tests. To avoid problems and faults there is a much better approach. The solution is an antenna pre-test by third party for just Euro 240 including documentation on Return Loss on a non-matched antenna, simulation of the matching circuit plus matching with passive components and measurement by Vector network analyser again.

The pre-test will always contain the test report and the S1P file of the origin PCB without matching. With the S1P file the customer of the pre-test can simulate matching circuits on its own again.

If you are interested in an antenna pre-test or antenna consulting for selection then do not hesitate to drop an email to harald.naumann (at) gsm – modem .de

Remark: Thanks to Michael Castle for his free proof reading