Do you use antennas in your products? Do you compare data sheets? Do you have problems comparing? Are the antennas in your device not compliant with the data sheet? Are there problems with radio certification? Then I will be glad to help you, starting with the analysis of the data sheets all the way up to the inexpensive test installation in the enclosure. Any enquiries should be addressed to harald.naumann (at) lte-modem.com.

In the following article I will analyse two dissimilar antenna data sheets. Since I am employed with a special distributor for wireless modules and antennas, I have access to a bunch of antennas from various manufacturers. As an independent author of the IoT M2M Cookbook, I’m extremely busy with antennas. In the meantime I own a Vector Network Analyser and an Antenna Radiation Pattern Test System.  From time to time I develop an antenna myself.  Writing books, cooking, painting or developing antennas is simply an expression of creativity.

A client wanted an offer for Wi-Fi/BLE antennas on FR4 or Flex-PCB with 100 mm cable and U.FL plug.  We have designed such antennas several times in our program. I chose two with similar prices and compared the data sheets, however the graphs of return loss were on different scales. In order to make a comparison I electronically cut out the two return loss graphs and layered them in PowerPoint. Afterwards I changed the size of the graphics and to match the scales. In the next step I redrew the two curves and in the last step I deleted the two graphics and inserted the dimensioning in the axes. 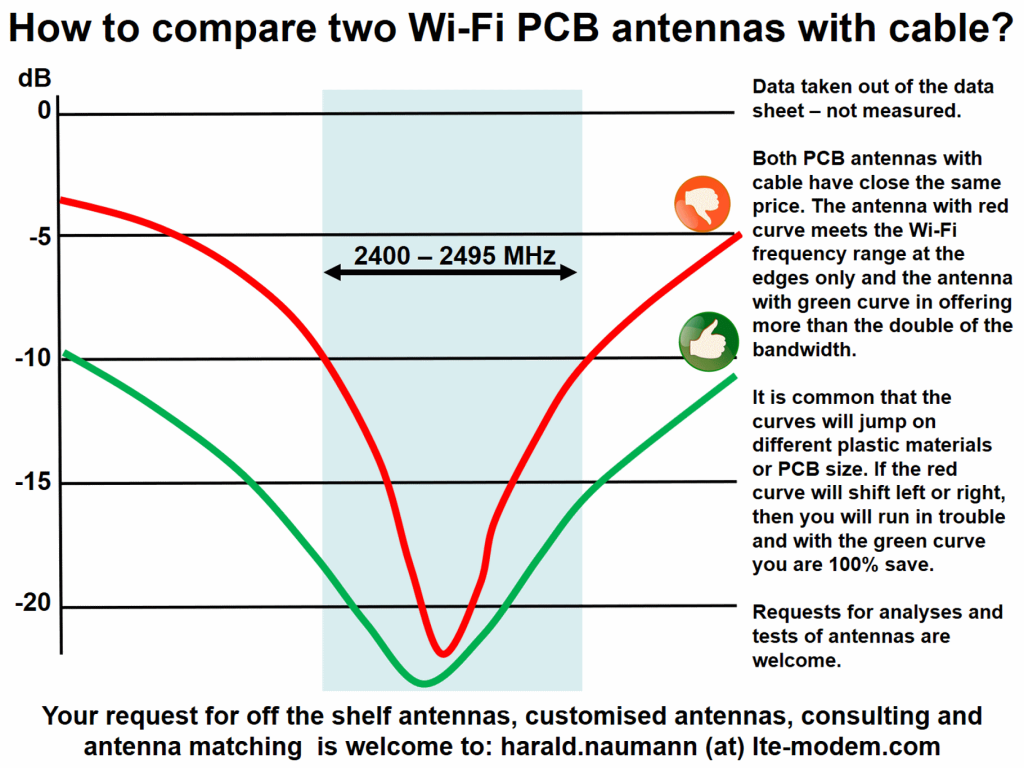 The prices are similar and the difference in antenna performance is big. The two data sheets support what we already mentioned in our recent LPWAN seminar.  Many manufacturers name their antenna parameters only at the top. The antenna efficiency of a unidirectional antenna is always measured and indicated in all directions. It is even the other way round. An antenna of a certain, known arrangement can physically or mathematically only achieve a known average efficiency. In this case it is a typical monopole antenna. If the efficiency in the peak is much higher than with the typical ideal antenna, then this indicates a directional effect. This is best seen with directional antennas (e.g. Yagi antenna). The antenna gain of a directional antenna is always much higher than that of an omnidirectional monopole antenna. With handheld devices or sensors, an omnidirectional characteristic is generally preferred.

Conclusion of the antenna comparison

The antenna with only 60 % antenna effiency is the much better antenna.

How the two antennas in your housing behave with your PCB is another topic. We always recommend a sample setup with antenna and empty board in the original housing or a similar housing.

Thank you in advance for your request for antenna samples, measurements or test setups to harald.naumann (at) lte-modem.com