When will this big wedding come true?

Microsoft showed that electromagnetic noise can be used to identify the position of a person in a room, what the person is doing, and even where a hand is placed on a wall. Microsoft’s vision is dimming the light. First applications could be game controllers. More about this amazing technology at “Your Noise is My Command: Sensing Gestures Using the Body as an Antenna” 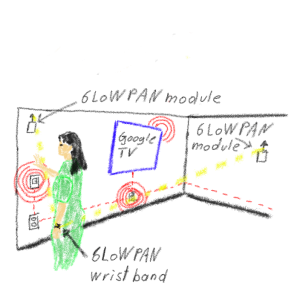 The combination of the Human Antenna with the 6LoWPAN module of Google will be one of the most useful combinations we ever have seen. Maybe you remember that Google promised a 6LoWPAN based protocol until end of year 2011 to us:
http://www.gsm-modem.de/M2M/m2m-componets/google-6lowpan-zigbee-z-wave/

This marriage will not be for Smart Home or Game Controllers. It is for Ambient Assisted Living. In many countries the governments have a problem with the ageing society. We are getting older and older, but there is often no money left to finance the residential homes for the elderly. As longer the elderly can stay at the flat at home at better it is. It will save money and gives a better quality of life.

Right now companies are developing electronic carpets to detect where an elderly has fallen down. This expensive digital carpets and their installation we can save and replace to Microsoft’s Human Antenna because they promised that they are able to detect the standing (or fallen) person in a room. The man down trigger in the wrist band will detect that the elderly is fallen. These sensors are not new and already used in an Austrian Ambient Assisted Living system. The Austrian system is using AC plugs with 2400 MHz radio links to create small “radio islands”. Each island has a unique ID and is communicating with the wrist band. The 2400 MHz radios in the AC plugs are able to run as meshed networks. This technology is called ANT+. More about ANT+ and the Austrian Ambient Assisted Living system by following:

Let go back to the idea to marry Google’s and Microsoft’s technology. The expensive carpets we don’t need and the radio network for triangulation we don’t need as well. Everything can be cheaper and simpler. The position we will get from Microsoft’s Human Antenna and the communication link we will set up with 6LoWPAN on 868 MHz/915 MHz. We can replace the laptop in Microsoft’s demo to calculate the position  to a small and cheap 32 bit micro controller already mounted on the 6LoWPAN module. The module offers several power save modes and will run on battery for years. It has tons of GPIOs, UART, USB, PWM and a lotÂ  more. There will be no discussion on security and privacy because it comes with standard security features on IPsec and IKEv2. Anyhow, who don’t want to wait for Microsoft’s technique can use the good old triangulation on 866/915 MHz.

If you are interested 6LoWPAN technology or ANT+, a mix of both of a mix with any kind of wireless or wired technology is welcome to ask for an offer for a bundle of evaluation kits that will support several technologies, including antennas and design in aid for the ISM chips and antennas to your product.

Just send an e-mail by using the form here or by e-mail to harald.naumann (at) gsm-modem.de .