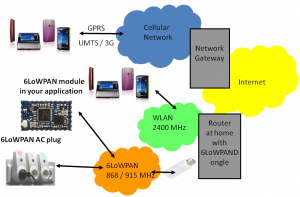 60% of zero is zero. What will be the realistic quantity? Which technologies will be used? Which protocols will be used? Right now the Smart Home market is a nightmare.

Only thing working shall be something on IP like 6LoWPAN. This I have seen live. One of my suppliers connected his 6LoWPAN modules to a third party router, powered on all, the network on 6LoWPAN organized itself and the LED lamps were visible on an Android app after a few milliseconds. Try the same with ZigBee, DECT or another technology and I guarantee that you will be lost.

6LoWPAN as a starting point?

In the devices were visible with its IP addresses quickly. The layer was 6LoWPAN on 868 MHz. 6LowPAN you also get on 915 MHz and 2400 MHz. There is 6LoWPAN on power line communication and there is a development of 6LoWPAN on Bluetooth 4.0 (Bluetooth Low Energy). 6LoWPAN is nothing else than IP communication on IPv6. It is a UDP/IP on one of the upper mentioned communication channels. To get it secure in the demo IPsec was used. Security is no issue. The Android phone was communicating securely to the WIFI router and the WIFI router was communicating by ethernet to the 6LoWPAN bridge and the bridge was able to communicate to the LED lamps. We were able to power the LEDs on and off and we were able to dim.

What I miss in an upper layer on UDP/IP. Let us compare it with email on your laptop or Android phone. Email is on TCP/IP and uses SMTP and POP3. The SMTP and POP3 on top of TCP/IP are supported by tons of email clients on several operating systems. Sometimes we get emails that look puzzled. We can read it but it looks different from what the sender had formatted.

In the Smart Home world we got promise of a rise of 60% on a communication protocol that does not exist as a field approved standard. If email after more than 10 years still generates trouble, what can we expect in Smart Home? The email clients are easy to count. Has somebody already counted the different machines? There will be much more developers involved. Developers are humans and humans make mistakes.

Do you really believe that tons of developers without experience in radio communication, protocols like 6LowPAN and IPsec and no upper layers like SMTP and POP3 will be successful?