Q: I have a question before I start my development. I seem to remember that you mentioned in an email that we need more bands for LTE-M. Are frequency band 8 and 20 not enough?

A: The question about frequency bands for LTE-M / NB-IoT often reaches me. In the webinar, we limit the answer to Germany, Austria and Switzerland plus the rest of EU27 minus 1 plus the USA and Australia. Minus 1 stands for the UK after Brexit. Nothing will change there for the time being and I don’t expect any change in the cellular frequencies. This gives us a good explanation for the antennas and certifications for the German-speaking region, EU26 + the UK and the rest of the world. In Europe, GSM will not be switched off in most countries. Germany was a pioneer in M2M based on GSM. We cannot switch off GSM. 3G (UMTS) is switched off by all network operators in Germany. LTE-M and NB-IoT we get from 3 network operators on band B8 and B20. For the fallback to GSM, band B3 is needed. A multimode module application (NB-IoT, LTE-M, GPRS) in Europe should support band 3, 8 and 20, as of January 2021. 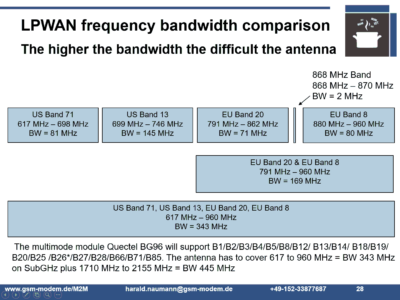 The lowest common denominator in Germany

In Germany, band 8 and 20 is sufficient for NB-IoT plus LTE-M. In Finland and a few other countries, band 3 is used for NB-IoT. However, this is primarily only done by network operators who do not have a licence for SubGHz in Europe. SubGHz means B8 and B20 for the time being. In the new LTE bands in the 700 MHz or even 600 MHz range, no European network operator currently operates LTE-M or NB-IoT. However, this is common practice in the USA and Australia. In the USA, T-Mobile, a subsidiary of Deutsche Telekom, operates its network in band 71 with the lowest frequency of 617 MHz. Anyone planning a global deal with Deutsche Telekom or Vodafone should look into their frequency ranges worldwide or contact us for the current status. We will be happy to provide the current list on a cyclical basis.

NB-IoT, LTE-M in use in DACH, USA and AU

Questions for the NB-IoT LTE-M developer

In which countries should the product be sold? Are private 5G networks to be supported? Are the costs for approval known or should we make a bid? The designated countries and carriers (NB-IoT), LTE-M, GPRS) determine the frequency range of the antenna, the size of the ground plane and the number of measurements required for radio certification.
Do you like this article? Do you want to read something similar more often? Then register on the blog. You will then automatically receive an e-mail with the next blog post. Recommendation of the blog is explicitly welcome. Enquiries about antennas and radio modules are also welcome. harald.naumann (at) lte-modem.com