Q: Thanks for all the materials you shared. I am reading the cookbook but I can only find some guidelines so build a GSM IFA antenna.

A: Can you please share with me the exact dimensions you used in your simulation?

Q: As I previously mentioned, I just bought your book to copy-paste your antenna and measure how better is (sic) than my actual antenna. 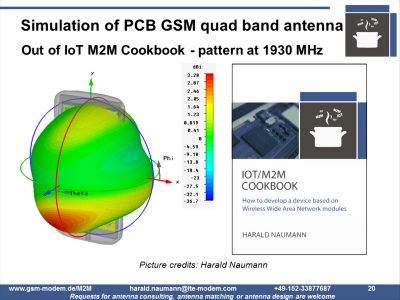 All this is described and simulated in the IoT M2M Cookbook. The dual F antenna is documented in these various dimensions. The photo of the Gillette order button shows a round version of the dual F antenna on a 70 mm diameter disc-shaped PCB. The phots of the test boards shows a double-bent version of the 900 MHz antenna radiators and a 90 degree bent version. In the order button, the radiator is not bent at all. Not bending gives the best result. Other pictures show the F-antenna encapsulated in casting resin.

Prepare your antenna according to the template and then measure the centre frequencies and the impedance with the Megiq VNA. By lengthening and shortening the two radiators, you change the centre frequency. By changing the short-circuit clamp, you change the impedance of the antenna. The clamp can be single or double. In the template and simulation, it was a double clamp. In the Gillette order button, only single.

So you should choose one of the starting points in the IoT / M2M Cookbook, set it up, buy a MegiQ VNA for about 3,500 euros and re-measure the result. The next step is to adjust the two radiators (lengthen or shorten). Then you adjust the impedance with the shortening clamp. This also changes the centre frequency, so you will ned to change the radiators again. Our designs are mostly 50 Ohm without a matching circuit to avoid losses in the circuit. When the prototype is ready in our lab, we order a circuit board. This might differ from the prototype. So we adjust the clamp and the length again. Then we order the boards again and measure them again. In the end, there are 20 to 25 different prototype PCBs on the table and I always ask my colleague why he doesn’t start with the last one (he is used to my sense of humour!).

Development of a multi-band antenna takes us about 7 +/-2 working days days at 1000 Euro per day and thus 5,000 to 9,000 Euros. If you copy the F-antenna for GSM, NB-IoT and LTEM from the IoT M2M Cookbook, and follow our design guidelines, then with a little experience, you have a good chance of being matched by us for around half a day’s time and a cost of only 480 Euros. Anything between 480 Euros and 9000 Euros is possible.

How to place the U.FL socket for matching on your own PCB is described in several examples in the IoT M2M Cookbook. Even the unpopular approach of feeding with a cable is described. There is a “sandbox” for the MegiQ-VNA available. This is a playground for measuring and learning.

If you don’t want to invest in a MegiQ VNA for about 3,500 Euros and the learning curve of about 10 weeks, you are welcome to order the antenna matching from me as a project. We will explain everything by email or Skype for 120 Euros an hour. We will guide the layout and measure and match the antenna at the end. Matching for a chip antenna costs about 240 Euro per band. If the board has enough ground plane, then we can combine band 8 and 20. The F-antenna in the IoT M2M Cookbook covers band 8 and band 20 and band 3 or band 8 plus band 3, depending on the setup. A chip antenna for band 8 and band 20 costs about 2 euros for 250 pieces. Matching costs the same as for the F antenna.

The first buyer of the IoT M2M Cookbook has developed the prototype of the Gillette order button. GSM 900 and GSM 1800 often work in the first attempt without matching. But whether the centre frequency, bandwidth and impedance match can only be determined after measuring with the VNA. The order button was changed several times and the developer of the prototype could not convert it to series production with radio approval. We then implemented this in the end for them.