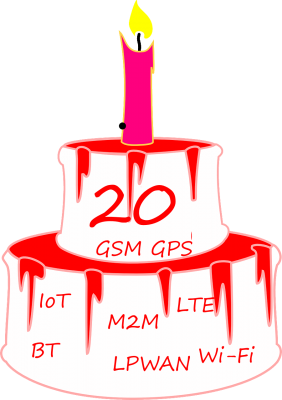 Before the year comes to an end there is a need for a birthday cake on my desk. This is because I have been working in GSM and GPS for 20 years.

What has happened in those 20 years?

Many GPS modules still list 21 mA to 35 mA in the data sheet. 5 mA at Full tracking is already more than 80 % lower than other modules in the GPS market. Let’s see what will happen in the next 20 years. Perhaps Europe will have to be Galileo. 😉

20 years ago the power consumption was 20 mA. A while later we moved to 5 mA. Today we reached estimated 1 mA. The current peaks have shrunk from 2,5 Ampere to 1,8 Ampere. The end result is a much longer standby time on battery than two decades ago. GSM / GPS trackers profit from the lower power consumption in both wireless technologies. They have become smaller and smaller and the standby time is much longer today.

The finished IoT M2M Cookbook is a living work, because I plan to offer updates. Some updates are triggered by consulting projects; other updates are triggered by questions from readers or customers of wireless modules and antennas.  The third reason for updates is LTE. In US we will get a sunset of GSM. AT&T will go ahead with UMTS (HSPA/WCDMA) only. In Europe Swisscom in Switzerland will sunset GSM and replace it with LTE and UMTS. LTE has already a chapter in my book. However, in summer 2014 there were not a lot of details about LTE-M, LTE-MTC, NB-LTE and further LTE topics in the public domain. It is still not clear which cellular operator will install which LTE technology. LTE is a patchwork of more than 40 frequency bands across the world and no LTE module will be able to cover all bands. We will have LTE modules with selected bands for regions.
Moreover NB-LTE and several LPWAN technologies are addressing the same market.

As long as I write cookbooks, recipes and consulting I do not plan to retire. I love to share my knowledge and experience and I am always glad if some electronic engineers with no or less experience in radios and antennas move within a few months from an idea to a prototype and later on to mass production.

And if you have a need for wireless modules, antennas, consulting or development for your IoT M2M application, then to not hesitate to drop an email to harald.naumann (at) gsm-modem.de. I will be glad to support your IoT M2M project as well. Thank you in advance for any request or order for the IoT M2M Cookbook.