The NFC /RFID evaluation kit comes with two different PCBs. Both PCBs come with the schematic diagrams. They are ready to copy. 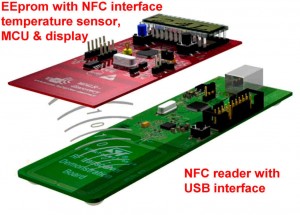 The EEprom has an I2C interface as usual. The foot print of the EEprom is  a well known shape  from EEproms of the past. Three pins have changed. The write enable does not exist anymore. The address lines are limited.
Two of the pins are now the NFC antenna interface. The other pin is operating as an Energy Harvester output. The Energy Harvester output of the EEproms drives the rest of the PCB like the MCU, the display and the temperature sensor.
If you power the PCB with a coin cell battery you will get a wireless temperature data logger. It is up to you to adapt further sensors.
The EEprom with its NFC antenna can be used as an interface to set parameters of your M2M device. It can also be used to track your PCB in production up to maintenance in the field. Nevertheless such an NFC interface can save a connector. A waterproofed M2M device can get a sealed box. The parameters will be set wireless by NFC.

The NFC /RFID reader is part of the kit as well. The NFC / RFID  reader comes with some demo software for the PC. With the software you can read and write to the EEprom. The transmitted energy of the reader is high enough to power the EEprom, the MCU, sensor and the display on the other PCB. 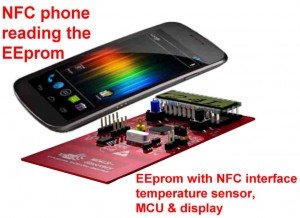 On Google Play Store you will find an app to read and to write to the PCB with the EEprom for free. The functions are the same than with the software for the PC.

The software to calculate NFC PCB antennas you get as a download free of charge. If you have no space left than maybe a NFC coil antenna or a SMT mounted NFC antenna is the better solution.