A dream came true. Within the last days, NB-IoT is moving in big steps. Orders for a new combined module on NB-IoT (LTE-Catt-NB1), LTE-Cat-M1, GPRS and GNSS (GPS, GLONASS) are welcome. If you miss NB-IoT or Cat-M1 for now, then just use the GPRS radio inside the module. Requests for data sheets, orders for samples and orders for evaluation kits are welcome to harald.naumann (at) lte-modem.com.

Features  of combined NB-IoT module as a glance:

If you live in Germany, then you live on the sunny side of the NB-IoT-World. The German Telekom installed 4000 new base stations and replaced GSM 900 to a combination of GSM900 plus LTE 900 (band 8). I am 99% sure that these new base stations will support NB-IoT as well. In parallel, they will run NB-IoT in LTE 800 (band 20).
If you use the Hata radio prorogation model for NB-IoT on 164 dB link budget 900 MHz, 30-meter height base station antenna, 1 meter high IoT node antenna, 20 dB penetration loss at building and 8 dB for fading then you will detect 11 km2 coverage in large cities.
If you use the Egli radio propagation model for NB-IoT with 164 dB link budget 900 MHz, 30-meter height base station antenna, 1 meter high IoT node antenna in the rural area then the calculation will show you 615 km2 coverage.
Germany has an area of 357,376 km2. 1963 km2 x 4000 = 2,460,000 km2. In theory, Germany is well covered by NB-IoT. The North of Germany is a flat region. I assume that they will have a good NB-IoT coverage soon. In the middle, we already have some smaller mountains and valleys. In the south, the mountains get higher and the valleys get deeper. Just look forward and power on the cellular network scanner of your Android phone. If you detect a Telekom BTS on GSM 900 then you are close to getting NB-IoT coverage.
However, Vodafone and Telefonica in Germany are not sleeping. The akorIoT community detected NB-IoT bearers in the region of Munich. Telefonica owns the NB-IoT bearer. We wrote an article about the guided band NB-IoT bearer here:
http://www.gsm-modem.de/M2M/m2m-componets/arduino-shield-lte-cat-m1-lte-cat-nb1-nb-iot-gprs/ 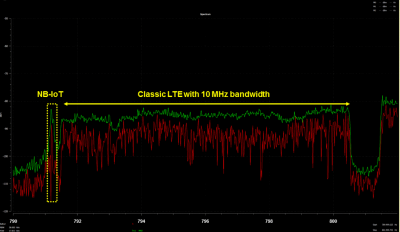 I already asked for NB-IoT SIM cards for my customers.  A standard SIM card will not run with an NB-IoT only module. The multi-mode module on NB-IoT (LTE-Cat-NB1), LTE-Cat-M1, GPRS and GNSS (GPS, GLONASS) will run with a SIM card out of your smartphone. It will register to the local cellular BTS. You can start with developing your IoT application now and have the freedom to run it on NB-IoT or LTE-Cat-M1 later on. Even if your region will be covered by NB-IoT or Cat-M1 soon, then your customers maybe have no coverage. If you plan a low power GPS tracker, then the new combined module is a perfect solution. Vehicles in Europe can cross the borders with control. If a vehicle will leave the perfect covered region of Germany, then the device can use the GPRS mode. BTW, now the NB-IoT coverage in the Netherlands is better than in Germany. This is not random because Telekom drives NB-IoT in the Netherlands as well.

As told in beginning I am ready to take your orders. I am ready to make feasibility studies, develop prototypes or IoT devices with my akorIoT team. We invested in an RMS to measure NB-IoT antennas and other antennas in 2,5D. Our mobile RMS will do the same like a 100K Euro chamber in the laboratory. The quality of the reports is the same. The difference is that we did not pay 100K but 14K Euro only and that it is so small and light, that we can carry it by train and aeroplane. The akorIoT team is able to stay in your office and to share the knowledge and reports in front of you. Many people share on Facebook – the akorIoT team members share in the real analogue life.