I have an (IoT) dream – Tesla in front of Burger King

I took this photo on my business trip on Monday to an electric vehicle charge station. On the way back to my home I got tired and decided to stop, take a nap and to get some coffee. I left the highway and stopped in front of a Burger King. Next to my car were four Tesla charge stations. When I woke up one of the stations was in use by this nice red Tesla. 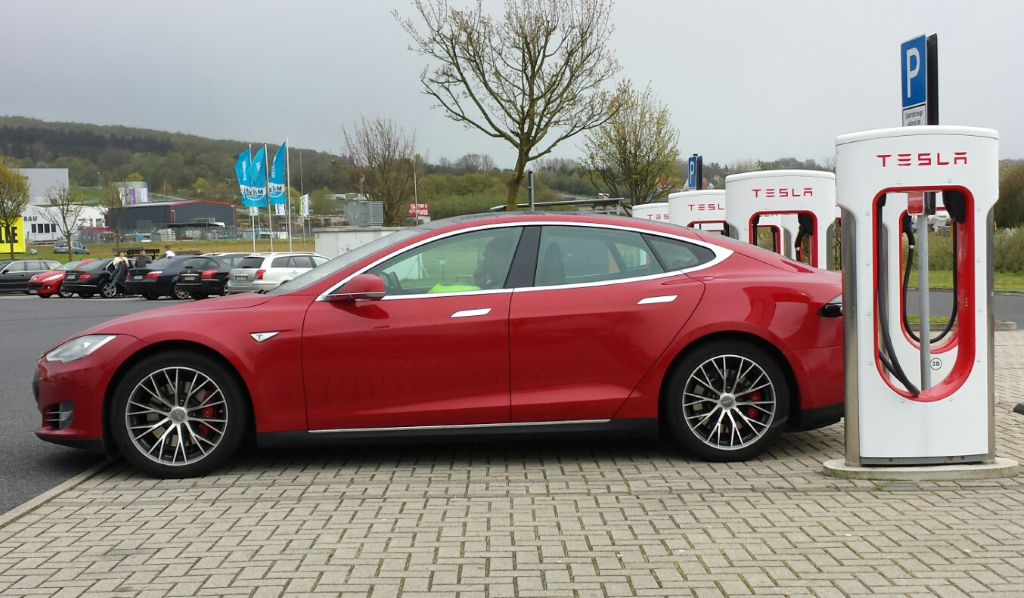 However, at my meeting for the EV charge station several problems came up.

The designers took care to produce a beautiful enclosure. It was a big metal enclosure like the one in the photograph above. Unfortunately, designers often have no clue about embedded antennas, antenna radiation and RF electronics. If they had, then they would be antenna designers. There was no opportunity for me to place an antenna on the planar shape of the roof of the charge station.  If I had, an off the shelf antenna in a sample case could do the job. For best electrical option therefore I had a no go. However, we found a good compromise by integrating the cellular antenna inside the enclosure close to the RFID reader.  The next step will be a feasibility study and I am pretty sure that the proposed cellular antenna will pass. We will test the antenna on a nearly empty PCB for Return Loss as usual. I expect a directional operation because the RFID reader is not on top  of the roof, but on the side of the EV charge station. I assume we will have no trouble because such charge stations are always in regions where a lot of people stay. Yesterday’s Tesla charge station is a good example. It was next to Burger King and a common gas station, and where there are people there are base stations.

The charge stations will be used in Europe and Russia only. There the frequency bands for GSM and UMTS are the same. However, we selected UMTS Penta band modules with pre radio certification on CE, FCC, GCF, PTCRB ,Anatel, RCM, IFETEL, DoC for Russia and Movistar. I gave the customer the freedom to save some cost by selecting the local version for EU or US and I showed the roadmap to LTE and NB-IoT. The cellular antenna above will cover NB-IoT, all UMTS band and all LTE bands as well. This allows the customer to migrate to LTE or NB-IoT in the future.

Next milestones in this IoT project:

This antenna pre-test by third is just Euro 240 including documentation of Return Loss on an unmatched antenna, simulation of the matching circuit plus matching with passive components and measurement with a Vector network analyser.

The pre-test will always contain the test report and the S1P file of the original PCB without matching. With the S1P file the customer of the pre-test can simulate matching circuits on their own again.

For the EV charge station we can avoid this test because we selected a cellular chip antenna we have used before. We save the costs for this and go ahead with step two.

Antenna on empty PCB inside enclosure

If you have a wireless IoT / M2M project and if you have a need for the same basic advice, consulting, feasibility study, prototypes, development up to IoT devices for mass production then do not hesitate to drop and email to harald.naumann (at) gsm – modem.de .