At the end of this week Germany, like a lot of other places in the western world, will slow down. It is Christmas time and we start to celebrate on the 24th of December. Before I start to enjoy this time with family and friends I would like to say thank you for all the requests and orders in 2016. 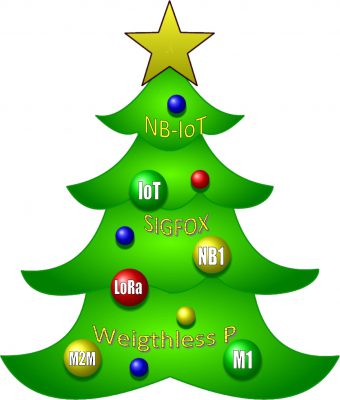 Looking back on 2016 it has a been a good business year. I set up several new wireless projects and a lot of existing projects are moving to mass production.

The outlook for 2017 looks perfect too. In January an order button on GSM module will move to mass production. This is equivalent to the Amazon dash button. The project started back in Q1 2014 so it’s great to see this maturing. The prototype was made by the first purchaser of my IoT/M2M Cookbook. The GSM antenna is a modified version that was inspired by my book. Three years later it is ready and I now have permission to write an article about it. Of course, I will keep you posted for sure.

In March my speech during Embedded World will be “Comparison of LPWAN technologies – Sigfox, LoRaWAN, Weightless-P and NB-IoT/LTE-Cat-NB1”. Read more here:
http://www.gsm-modem.de/M2M/m2m-events/comparison-lpwan-sigfox-lorawan-weightless-p-and-nb-iot-lte-cat-nb1/

Furthermore, I started to write my next IoT/M2M Cookbook related to LPWAN. Everybody will get the recipes for a perfect “wireless dinner”. I will explain using real world examples which LPWAN technology to use and why. One example will be an LPWA network for the small village where I was born. I used free-of-charge software to simulate the radio propagation. The terrain data in 3D I got for free as well. However, to make a wearable in Sub-GHz spectrum real or to make an IoT device with long battery real is difficult. 10+ years from two AA cells requires a special effort. The high sensitivity of the LPWAN modules will require superior PCB layout as well. The new book will cover all these new topics.

Achieving 10+ years or more from a battery also calls for better antennas. A return loss of 6 dB versus 10 dB makes a difference in the antenna efficiency too. For Sigfox and LoRa I already achieved a return loss of 10 dB or better on the whole 868 MHz and 915 MHz band. Having learned this lesson I plan to implement a similar solution for NB-IoT too. In Germany, we will use band 8 and band 20. The GSM 900 band and the LTE 800 band will be combined. The combination is from 791 MHz to 960 MHz = 169 MHz bandwidth.

Everybody is talking about LoRa. but in January I will get my Weightless-P base station: http://www.weightless.org/about/weightlessp

LoRa claims to cover 15 km range. I do not know who started the marketing hype around a 15 km range, but now journalists are repeating the ridiculous story. I plan to show 50 km using Weightless-P technology and I will also show that 15 km or 50 km are useless and not practical for a realistic LPWAN application. The range is not that important but data throughput is. In Europe, we have 868,0 MHz to 868,6 MHz (600 KHz bandwidth) with 1% duty cycle. In this small 600 KHz silver of spectrum, we expect to service millions of IoT devices and yet just one LoRaWAN deployment with three channels will “eat” 475 KHz of bandwidth.

In my opinion, 2017 will be the year of LPWAN, optimised antennas and low power concepts. I will keep you posted.

I wish you and your team a Merry Christmas and a great start for the year 2017.