The iPhone 4S came first, followed by the iPAD3 and the Motorola Razr now, Aldi is selling a laptop for Euro 499 equipped with Bluetooth Low Energy, also known as BT 4.0 or Bluetooth Smart. It was previously called Bluetooth Ultra Low Power, and in early 2001 as WiBree. “Wi” for wireless, and “Bree” for Bree in the Lord of the Rings. Bree was the town where the two major roads, the Great East Road and Greenway, crossed.

Nerds, creative minds, innovators, and hobbyists – everyone is on the hunt for applications. The software-tools for smart phones are often for free.  System on Chips MCU (e.g. ARM0), BT 4.0 Transceiver, DC / DC converter and RC clock generator in a very small IC unit. Add to that many serial links (e.g. USB, I2C, SPI) plus lots of additional I/Os. A Qwerty-Keyboard, for instance, requires quite a lot of I/Os. 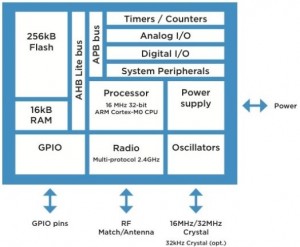 A thermometer, for example

The thermometer to measure outdoor, indoor, or aquarium temperature is easy to build. Once you put it into the water, you get the temperature as well the pH value. Outside the water, it detects humidity, and the phone app determines the dew point. It can also measure brightness via a light sensor.

On my next vacation I am going to build a prototype for an outdoor thermometer. Indoors, air conditioning keeps the temperature at a comfortable cool zone, so I would need to find out what the temperature outside is from my smart phone. And whoever actually opens up their app, would also be able to share the temperature to Facebook or Twitter.

What is your first Bluetooth 4.0 application?

Remark May 2013: The first version of the article was written in December 2012. Now we have May 2013. The temperature sensor, waterproofed comes true. The light sensor is included as well. The sensor for humidity was replaced to an accelerometer and the second version in on the move with magnetic sensor. The first and the second lot of production were sold out and for the next big lot pre-orders are placed. All orders were placed from system integrators. On Kickstarter people placed orders for products with less features. They backed it and they still have to wait to get a single piece.