The physics in US is the same than in Europe. The energy consumption of a radio transmitter is computed by multiplying the power output with time. LPWAN in the unlicend band in the US  has not to follow a duty cycle but a maximum time of 400 ms per data package plus frequency happing. The graph clearly shows the envelope of various LPWA transmitters in the States over time. In the US SIGFOX and LoRaWAN are limited to 30 dBm TX power. SIGFOX achive up to 24 dBm. The standard LoRaWaN modules are physical limited on the output power of 20 dBm of the transceiver of Semttech. To achieve the 30 dBm a LoRaWAN module will need an expensive external power amplifer with a gain of 10 dB. SIGFOX and NB-IoT are along the right scale of time axis.  We used 12 bytes in this comparison again because SIGFOX is not able to transmit more than 12 bytes in per message. We selected 154 dB link budget, because the maximum link budget for SIGFOX in US is 156 dB. 154 dB link budget is the specified in NB-IoT CE level 1. In NB-IoT we have three coverage enhancement (CE) levels specified. CE level 0 corresponds to normal coverage, and CE level 2 to the worst case, where the coverage may be assumed to be poor. 155 dB link budget is the maximum realstic link budget for LoRaWAN with a 3 dBi gain antenna at the gateway. A higher antenna gain like 5 dBi makes no sense, because then the antenna gain angle get small. We used Quectel BC95-B8 (NB-IoT), Acsip S76S (LoRaWAN) and AX-SFUS (SIGFOX) for comparision because those modules have a footprint in the market. 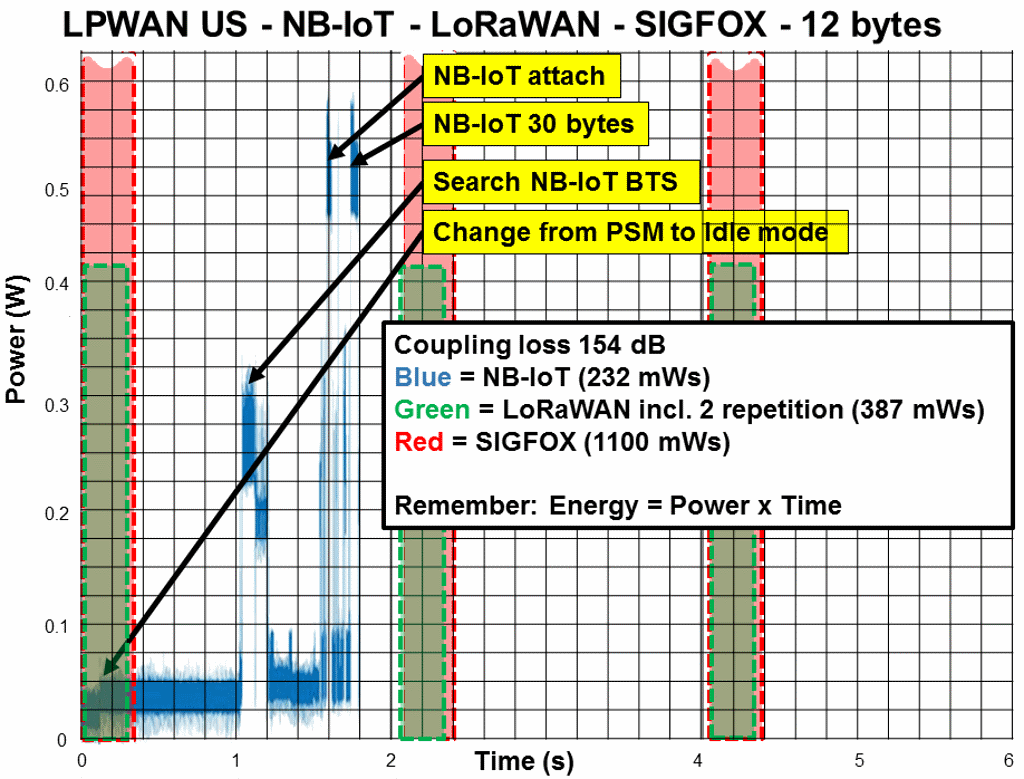 SIGFOX has a purely static transmission protocol. With SIGFOX, a message with a maximum cap of 12 bytes will be repeated three times. The transmission power or the speed of the data transmission is fixed at 600 bps and can not be adjusted. Even when the device is in the immediate neighborhood of the gateway, approximately 1000 mWs of energy are used repeatedly. A check for accessibility to a gateway does not take place for 2,500,000 SIGFOX devices shipped until March 2018. A possible collision on the air interface will not overflow; the 1000 mWs will be spent even if the 12 bytes cannot arrive. An acknowledgement of all uploaded messages is not possible because the protocol of SIGFOX allows only four downlink messages with a maximum of eight bytes. The static SIGFOX protocol has a very high-energy consumption because neither communication speed nor TX power level can be adjusted. The new feature called Monarch will check for a beacon signal at the gateway. As soon new modules with the new feature will be available the energy consumption will get better. However, the three static repeations are still left because their sno acklowledgement of packages.

A LoRaWAN base station does not send any beacon signal and is called a gateway. LoRaWAN also does not allow a check whether other LoRaWAN base stations are nearby. If an acknowledgment fails, the speed of the transmission is changed and sent again. The number of unsuccessful iterations is proportional to the unnecessary energy consumption. If an acknowledgment mode is activated, the device generally acknowledges the gateway with the highest RX level. For immovable objects, a new transmission is sent at the rate of the last successful transmission. LoRaWAN tries to send the 12 bytes as fast as possible in order to optimize for the energy consumption. As LoRaWAN transmissions are asynchronous in nature, collisions on the air interface are likely. In addition, in the unlicensed spectrum band, other unknown participants that are asynchronous in the same radio channel can cause interference. At 154 dB link budget (152 dB sensitivity of the gateway plus 3 dB antenna gain) and with a message size of 12 bytes, LoRaWAN occupies the channel for 313 milli seconds. With a longer time, the probability of a collision increases. Therefore, three repetitions are assumed. At its maximum throughput, the worst-case scenario leads to five repetitions. If five repetitions need to happen then it will result in several minutes of delay for the delivery of a simple alarm message. However in Europe LoRaWAN will run three channels with 1% duty cycle plus up to five more with just 0.1% duty cycle. In US LoRaWAN defines 64, 125 kHz channels from 902.3 to 914.9 MHz increments. There are an additional eight 500 KHz uplink channels in 1.6 MHz increments from 903 MHz to 914 MHz. The eight downlink channels are 500 kHz wide starting from 923.3 MHz to 927.5 MHz. LoRaWAN in US has much higher frequency bandwith and 72 channels.

NB-IoT in US and Europe or rest of the world is working the same. With NB-IoT the communication is synchronized. An NB-IoT module will check the presence of a base station before sending the message. Unnecessary transmissions are thus avoided. NB-IoT uses TDMA and transmits in defined time slots in the licensed spectrum band. A collision with unknown participants is thus entirely avoided. NB-IoT regulates the transmission speed based on the bit error rate. The error rate increases as with all radio systems with the distance to the base station. With repetitions in the transmission and consequently longer airtime, the errors are figured out and corrected. Unlike LoRaWAN and SIGFOX, the maximum link budget of NB-IoT is up to 164 dB. However, at 164 dB, however multiple repetitions are necessary. The net communication speed at 164 dB is estimated at 150 bps. The NB-IoT network in Dresden, Germany, is planned for an estimated 154 dB coupling loss with deep indoor coverage. To sum up, NB-IoT is an intelligent protocol that avoids collisions and prevents unnecessary transmission. In addition, the NB IoT can transfer from one byte to several hundred bytes within one message container. With SIGFOX one message is limited to 12 bytes. LoRaWAN is capped at 148 to 154 dB (SF10, SF11, SF12) and limited to 38 bytes of data in addition to 13 bytes header. Longer messages like 50 to 200 bytes with LoRaWAN and SIGFOX must be split into several smaller messages, and as a result require a message header with counter. The server has to put it all together and request the missing messages again. In addition, with multi-frames, the header of 12 bytes or 13 bytes must be repeated at LoRaWAN and SIGFOX. This effort and energy loss will not occur with the NB-IoT network. 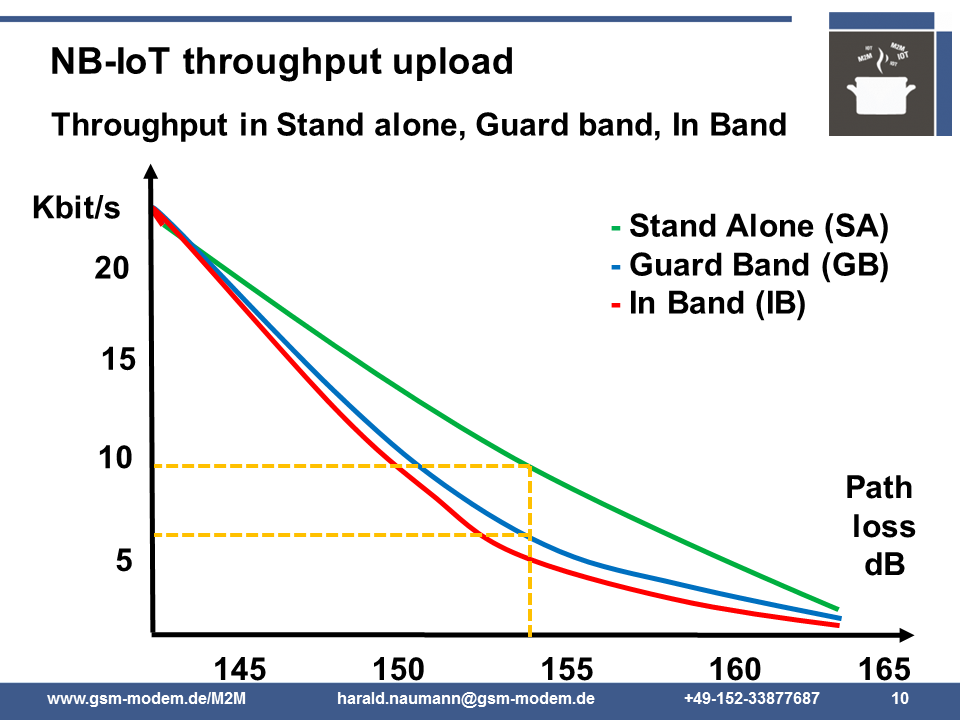 Collusion of the LPWAN comparision for US

SIGFOX is static at 600 bps and repeats statically three times and does not control either TX power or speed.
LoRaWAN transmits at 155 dB coupling loss with 977 bps, and with three repetition it leaves out about approximatly 300 bps at the end. Transmission without repetitions will only work on standalone trial with few participants and is not typical of the field setup. With increasing numbers, the collisions will continue to rise. At maxium troughput an Aloha based protocol will have a package loss of 82%. Moreover LoRaWAN <> LoRaWAN. The conditions and settings for a LoRaWAN module in EU and US are total different. LoRaWAN oon speccification 1.1 never can roam between US and Europe because LoRaWAN has no beacon to detect.
At 154 dB coupling loss NB-IoT has a transmission rate of 6000 bps net. The repetitions are already deducted in the 6000 bps calculation. That is the reason why NB-IoT only needs 1.8 seconds for 12 bytes (although it shows as 30 bytes on the graphic). The UDP header is also included in the 30 bytes. If you transfer to Non-IP, even the energy to transmit the UDP header will be saved. NB-IoT is extremely dynamic and has no common problems as expected in the unlicensed band. NB-IoT is on TDMA and will avoid package losses by a time synchronised communition. The winner in comparison of transmitting of 12 byte on 154 dB coupling loss is NB-IoT.

I hope that this short article will motivate you to think about which LPWAN will best fit your application. If you still cannot reach conclusion based on this information and need some advice or consulting then do not hesitate to drop an email to harald.naumann (at) lte.modem.com . I am working on my new IoT / M2M Cookbook related to LPWAN and I can offer you all the above mentioned LPWAN technologies (modules, antennas, base stations). Thank you in advance for your comments at the blog or ping me an email.
#LPWAN_Compare