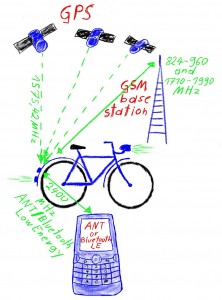 State of the art Android smartphones of Sony Ericsson supports the radio link called ANT+. Sony Ericsson launched five different mobile phones with ANT+ radio inside on the 6th of January 2011 at CES in Las Vegas. The APIs you can download free of charge at http://www.thisisant.com/pages/developer-zone/android-api

Below is a list of the existing mobile phones that provide ANT connectivity are:

Seven further manufacturers of mobile phones will follow. There is a dongle available for the iPhone. There are USB dongles, mini SD cards and micro SD cards with ANT+ radio link on the market as well. ANT+ with its more than 300 members is a field approved 2400 MHz Ultra Low Power technology.

The smartphone with its ANT+ radio inside will access to the ANT+ radio module inside the box of the GSM/GPS tracking device. Behind the ANT+ radio will be a small micro controller. The communication link between the ANT+ module and the uC is a standard UART. The micro controller inside the box will have a wired link to the GSM module and GPS module as well. If the biker will leave the bike, then the alarm system in the rear reflector will be powered on automatically. The same result we will get by using of an active RFID tag. It is also possible to combine the active RFID tag with the ANT radio in the phone. If the phone or the RFID tag is moving away from the bike the alarm system will be powered on.

The ANT AP2 module is a drop-in module based on the reference design of nRF24AP2, a new generation of ANT system on chip family from Nordic Semiconductor.

An F antenna is integrated on the small-sized 20mm by 20mm board. The module has been certified to comply with radio regulation or standards covering global markets include North America, Europe, Japan and Australia. The integrated module eases the burden for application and system developers from extensive RF and antenna design, and regulatory compliance testing, allowing quicker time to market. With is 8 ANT channels, the module is ideal to build control or hub nodes of a wireless sensor network.

The ANT module is for the prototypes only. My using of the ICs it will need very small space on your PCB. The inverted F antenna can be replaced to an loop antenna integrated in the PCB or to a ceramic chip antenna to save further space. 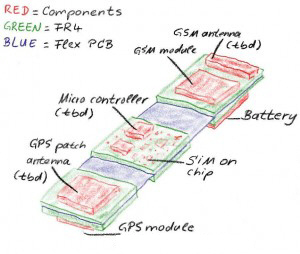 GSM/GPS modules, antennas and further use

For the GSM/GPS tracker inside the back light of the bike we can use an 0,8 mm PCB of FR4 on Flex rigid PCBs are not necessary.

Do you have further questions and would like to start the development of your own wireless M2M app right now? We will be glad to share our more than 15 years in GSM and GPS plus 25 years in radio communication with you. Just send an e-mail to harald.naumann (at) gsm-modem.de

GSM/GPS modules, antennas and further use

For the GSM/GPS tracker inside the backlight of the bike we can use an 0,8 mm PCB of FR4. on Flex rigid PCBs are not necessary.