Radio Performance:
The module operates in the 868/915MHz ISM Bands, which are less crowded compared to the 2.4GHz and 5.6GHz bands utilized by Wireless LAN,
Bluetooth and video surveillance. Further the frequency band has much better radio propagation characteristics. This allows for higher range with less
power consumption, reducing infrastructure cost and extending battery lifetime.
The radio module MAC and PHY is compliant to the IEEE 802.15.4-2003 standard, which specifies a RF data rate of 20kbit/s in the European Union and 40kbit/s in North America.
Wireless Network Processing:
The radio module is powered by an ARMâ„¢ Cortex-M3 microcontroller which allows for fast network processing with advanced security and data
integrity. The security firmware enables standard compliant end-to-end IPv6 Encryption. A tailored IPSec and IKEv2 subset was selected to encrypt and sign the outgoing and ingoing data with limited power consumption and memory usage. The radio module is ready for implementation of the up-coming IP-based Mesh Routing Standard (ROLL, Routing over Low power Lossy networks). 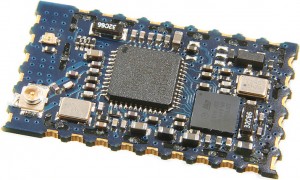 The 6LoWPAN Radio Module is controlled via a command interface to be used via SPI, UART and Virtual USB COM Port. It has fixed commands to
open sockets for reception and transmission of packets, to setup radio channels, and to configure the MAC layer. Further the IPSec key database is maintained and new keys are generated and exchanged on request. The software controls external LEDs for status indication. An interrupt pin is raised if new packets have been received or an error has occurred.
Availability
The ZWIR4511 module is already on the market.Â  For big volume projects you can also ask for the ZWIR4501 transceiver chip and a STM32 microcontroller. Also a development kit and a 6loWPAN to Ethernet router module is available. More details by email hn (at) gsm-modem.de.