The akorIoT Group has a development team with many years of experience in wireless data transmission which today is termed “Wireless IoT”.  The integration of antennas into enclosures is another area of expertise for the akorIoT Group; in addition to standard antennas such as solderable chip antennas or flex PCB antennas, customer-specific antennas are often used in their designs.

We asked designer Thomas Klimek to develop an enclosure concept for an IoT button. The Amazon Dash button and the NB-IoT button from Deutsche Telekom were provided as examples of IoT buttons, these two buttons are very similar in shape.  An additional button from Finland called “BTTN” Finland was also provided. 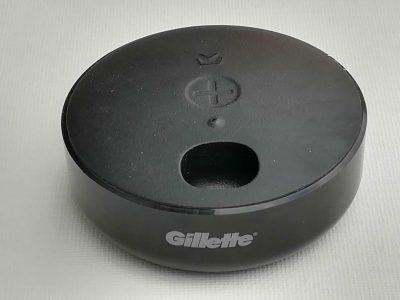 A press on the “+” is enough and the owner of the Gillette Club Station is supplied with new razor blades.

The most challenging example was the button for Gillette for ordering razor blades. No specifications existed. So he was free to imagine the new product with one button, several buttons in a circular, rectangular or triangular housing. Thomas Klimek was at liberty to give free thought to his creative ideas.

Creative ideas of a designer with experience in wireless IoT products

The result after a few days’ work was impressive. In the first iteration, two different IoT devices were created, each with a push button for operation. One of the two devices is portable and has a belt clip.

In the first design step, hand sketches are made. After review, these are then converted into software 3D models. These models can be further processed and also printed in 3D. Since the designer has experience from other joint wireless projects and builds radio-controlled drones himself, he understands battery and antenna design. Antennas and batteries require installation space and their requirements must be considered during the design phase.

The rounded shapes in the designs lead to a loss of installation space for the battery which is generally square. Other shapes for batteries are possible but lead to high tooling costs. Not all shapes can accept batteries. The two designs create unused installation space in the enclosure. A problem often arises when the design is ignorant of the optimum installation space. For consumer products on the other hand, look and feel are important. A compromise must be found between design and optimal technical implementation.

Development of the antenna concept

Due to the many round edges, a customer-specific antenna is necessary. Square chip antennas for NB-IoT and LTE-M do not fit into the round shape of the enclosure. The antenna is best integrated into the plastic enclosure as a Flex PCB or as a metallic imprint. Printing metal on plastic is the speciality of a company in a neighbouring town to the akorIoT Group. The machines are designed, manufactured and delivered worldwide.  For initial tests, the enclosure itself can be coated and the antenna structure worked out. Once the antenna concept has been clarified, the metallization of the inner surface of the enclosure shell is ordered and the desired antenna structure is scratched into the metal surface by hand. Once the structure has been worked out, it can be transferred to the inside of the housing shell. The advantage is clear – there are no tooling costs, and the antenna structure can also be adapted in later stages of product development without major costs.

Size of the device and technical feasibility of the cellular antenna

The antenna system consists of the enclosure, antenna and surface of the circuit boards. What we “see” as an antenna is only half the truth. Dipole antennas have two antenna segments (We know are familiar with this from traditional V shaped television antennas). Monopoles have the second segment of the antenna located in the ground plane. The size of the ground plane in a monopole antenna therefore cannot be reduced at random to accommodate cosmetic design. In addition, the distance between the antenna structure and the ground plane cannot be reduced to any arbitrary level. Sometimes a few millimetres distance between the antenna and the ground plane affects whether the antenna will function or not. Nobody can cheat physics. The battery or even a display will also strongly influence the construction of the customer-specific antenna. The first step is to develop such an IoT device on an almost empty PCB with the selected antenna, battery, display and other components in the electrical field of the antenna. Only when the concept has been successfully tested can the development of the complete PCB begin. The almost empty PCB can also contain the wireless modules. These are then controlled with USB cables from the PC. If the return loss is good, this does not mean that the antenna really radiates the power. The radiated power must be carefully measured in all three axes.

Integrating GNSS and BLE antennas into an IoT button is straightforward. Both can be designed as ceramic chip antennas. They can also be printed into the housing or designed as a Flex-PCB. The GNSS antenna can be integrated into the cellular antenna. If the wireless module transmits with 23 dBm, GNSS receiving is not possible. A switch between GNSS and cellular operation can be used. In cellular radio modules such as the Quectel BG77, the switch is already integrated into the module.

There is no big radio difference between NB-IoT, LTE-M, LoRaWAN, Weightless and Sigfox. The frequency range is similar (approx. 700 MHz to 960 MHz). NB-IoT and LTE-M need more frequency bandwidth and therefore more ground plane on the PCB. With LoRaWAN, Sigfox or other radio protocols in the 868 MHz or 915 MHz band you can develop smaller devices. The best example of this is the remote control for locking the doors on the vehicle. These radio keys are very small and are a compromise between size and antenna performance.

Building your own wireless IoT devices

Those planning a mobile device with a battery using NB-IoT or LTE-M can skip some steps in the development cycle by purchasing an “akorIoT SensPRO” and adopting the schematic in large part or even completely. The SensPRO is equipped like a programmable logic controller with open interfaces and can be provided its own program code by means of a free C-compiler. The 7 sensors on the main board can be upgraded with internal or external expansion connectors.

A SensPRO is actually an IoT button the size of a credit card. The board surfaces on the left and right are only for mounting in a multi-purpose enclosure. The SensPRO covers over 20 applications and an IoT button is one of the simplest products. The cellular antenna is integrated into the main board of the SensPRO. If the main board is installed in the enclosure shell using Flex-PCB or a printed antenna, only 75 % of the surface area of a credit card is required. 85 mm x 55 mm x 0.75 means only approx. 55 mm x 64 mm footprint for the motherboard. The picture of the open housing shows an example of a dual GSM antenna in a 42 mm x 42 mm housing with a LiPo battery with a capacity of 470 Ah.

If you are also planning your own small, battery-powered device, then I would be happy to receive an e-mail from you to harald.naumann (at) lte-modem.com. Our reference list and the experience from the many projects is considerable. We will be happy to work out a rough concept with you and then proceed to a proof of concept. The first step is generally to develop a concept for the placement of the antennas. This also includes deciding whether the development of a customer-specific antenna is necessary or commercially reasonable. Only when the antenna concept and the housing are in place will the rest of the schematic be discussed and implemented in further steps. The rest of the schematic can then be developed by your own team or by the akorIoT Group. The same applies to the software development. From the simple antenna concept to the IoT device including the software from a single source, anything is possible. The customer can determine the scope of the development support required from the akorIoT Group. If the board is implemented by their own teams, the developers of the akorIoT Group are available with advice and tips. The goal is a good, wireless IoT device and a satisfied customer.

Founding members of the akorIoT Group are

Wilhelm Oelers CTO of Triptec and Harald Naumann, author of this article and author of the IoT / M2M Cookbook. Harald Naumann is the full-time Sales Director for wireless modules at Tekmodul in Munich. The readers of the IoT / M2M Cookbook asked for development environments. This was achieved using akorIoT PCBs. “Akor is the ancient Celtic word for “open”. akorIoT boards and the services represent openness and open cooperation with transfer of knowledge to the partners.