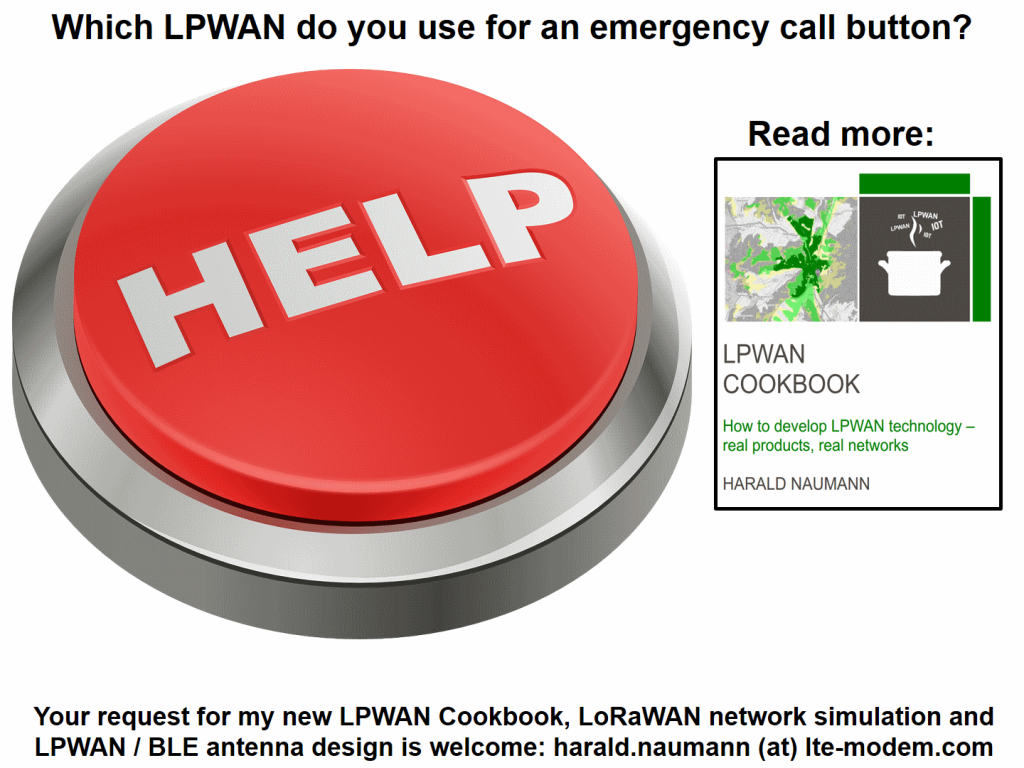 First of all, we have to establish whether the mobile emergency call button is to be used locally in a building, on a company campus, or nationwide in a European or a non-European country. In this article, we will first limit the mobile emergency button to use in Germany. The design for Germany can easily be transferred to other regions.

For a nationwide mobile emergency call button in Germany, NB-IoT with a fallback level on GSM is currently the best for future-proofing. Since April 2020 national roaming for NB-IoT has been available in Germany from Deutsche Telekom and Vodafone. The emergency call device therefore has access to two parallel but independent NB-IoT networks. Furthermore, there are now very inexpensive NB-IoT modules offering GSM operation in parallel to NB-IoT. With the addition of GSM such an emergency call system can access three independent GSM networks and as a result an NB-IoT/GSM combination module can achieve a fivefold network redundancy in Germany. 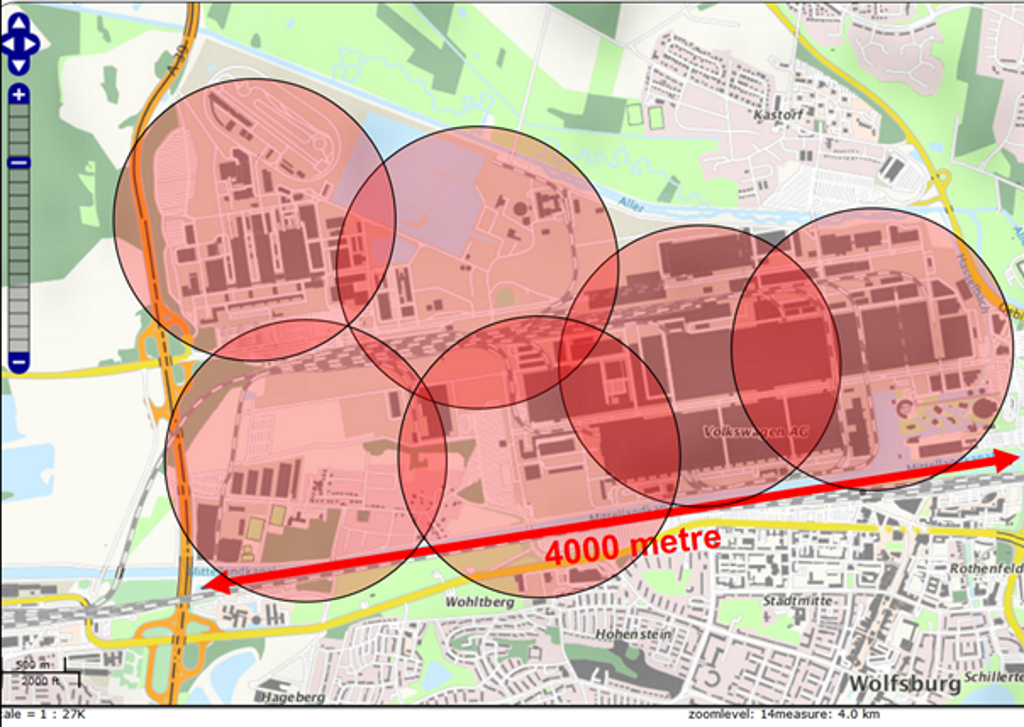 If a mobile emergency call system is needed locally on a company campus or in a building, LoRaWAN is a suitable solution. LoRaWAN offers us inexpensive gateways including an antenna for outdoor installation for about € 500. The frequency range for LoRaWAN in Germany is license-free. For the Volkswagen plant in Wolfsburg, less than ten gateways are needed to cover the entire plant area including inside the buildings. For LoRaWAN I can deliver the gateways, the evaluation kits with the LoRa modules, access to free  testing on a LoRa server and also the antenna designs. Furthermore, my new LPWAN Cookbook contains 50 A4 pages covering planning, simulation and testing of a private LPWAN. I have planned a private radio network on LoRaWAN for my home community Kirchheim in Hessen. In the community of Kirchheim, twelve villages are spread over 57 km² in eight valleys. The villages have between 80 and 1800 inhabitants. Twelve LoRaWAN gateways are needed for coverage inside the houses. I offer the complete simulation including the locations and the selected antennas as a free download accompanying the LPWAN Cookbook. Every reader can then load the complete model of locations and antennas and reproduce it in their simulation software. The software used for the simulation is free of charge. Furthermore, I refer to software which costs only $500 and offers more functionality than other software costing $5000 . This  software not only calculates the diffraction and refraction of the radio waves at the edges, but also the reflection of the radio waves at the surfaces of the houses. The three 3D models with all houses for Munich is available free of charge. Furthermore, the software supports the import of 3D models from OpenStreetMap. OpenStreetMap offers a powerful tool for creating 3D models yourself. It allows you, among other things, to capture the buildings on the Volkswagen plant in Wolfsburg. Furthermore, the $500 software offers the possibility of computing buildings automatically. The software recognizes buildings by their rectangular floor plans and independently calculates building structures. In this case, you only have to enter the height of the buildings. For the company terrain in Wolfsburg, this means that for the buildings with a flat roof you only have to enter the height of the buildings in order to create a usable 3D model.

If you need a mobile emergency call button which also offers a localization via the field strength in the building, Neocortec with its SubGHz Meshnet is suitable. With Neocortec the radio network is built up completely independently. Each node is also a router. Due to the high link budget and the good penetration through walls, only a few permanently installed nodes are necessary to cover a building completely. These permanently installed nodes are called anchors. Each mobile node synchronizes every second up to every 30 seconds with 3-12 neighbouring nodes. The field strength is also transmitted to the neighbours during synchronization. The gateways in such a SubGHz Meshnet cyclically receive the field strength values of the nodes to their neighbours. Since the locations of the anchors are known, the approximate location of the mobile nodes can be calculated. During a test in our office in Munich, we established a radio link from the meeting room on the left side of the building to the offices on the next higher floor on the right side of the building. In doing so, we passed the floor/ceiling and four walls and still had plenty of link margin-left. For a mobile emergency call system in a building or on an oil platform I would recommend SubGHz Meshnet. If you limit the number of neighbours to three and set the synchronization time to 30 seconds, a radio module from Neocortec works on two standard AA cells with 2500 mAh for 7 years including 170 messages per day with 21-byte user data per message. Each message from a node to a neighbour is acknowledged at the node. This means that an alarm message is acknowledged from end-to-end. In addition, cyclic synchronization means that the gateway knows which nodes are located in the network. If a node fails to appear during synchronisation several times, the node has been lost or has left the network. If you compare this with NB-IoT and LoRaWAN, you will find that there is no cyclical synchronisation of the stations in the network. A missing subscriber is not detected and a failed emergency call button does not work anymore and cannot transmit a message in case of emergency. This unique SubGHz Meshnet changes the radio channel with every connection and hops across the whole 868 MHz bands in Europe. If a packet is lost during transmission to a neighbour because the radio channel used is interfered with, the message is repeated on another radio channel. The radio module selects the 3-12 neighbours randomly. If 50 participants are visible in a radio network with 500 participants, then the participants with the highest field strength are not selected but a random selection is made. This means that two or three participants in the same room may see the same 50 neighbours but select their route to the gateway completely differently. Since all 500 participants in the network do this, the radio network is very evenly balanced. A combination of SubGHz Meshnet and a NB-IoT/GSM combination module provides perfect indoor coverage including automatic detection that the subscriber is no longer present in the SubGHz network plus perfect fivefold redundant coverage outside the building or company campus.

In the community of Kirchheim with its twelve villages, none of the villages is completely covered by Sigfox in the indoor area (blue). But in all twelve villages, you can make a phone call with your GSM phone. In addition, in the community of Kirchheim, both NB-IoT network operators offer more or less good network coverage. A SubGHz Meshnet distributed over all twelve villages for 3600 inhabitants in many houses is probably not economical. In order to guarantee this, every second or even third streetlight would have to be equipped with an anchor. If all streetlights are equipped with a SubGHz Meshnet from Neocortec to monitor the function of the streetlights and to send control commands, this existing Meshnet could be used for other tasks like an emergency call system. 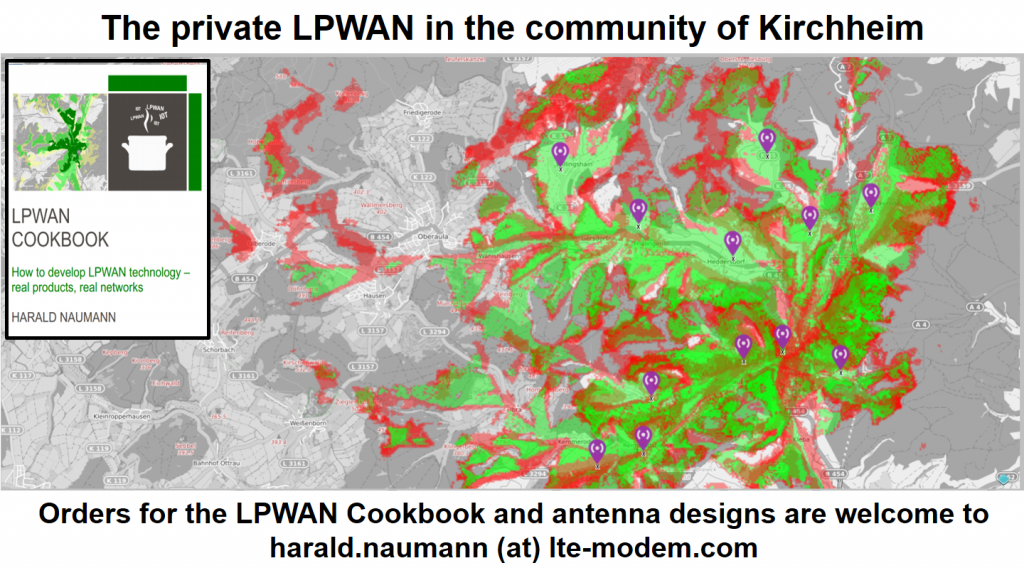 Private LoRaWAN for the community of Kirchheim

Twelve gateways worth € 500 installed by the voluntary fire brigade would be economical if enough participants in Kirchheim wanted to use the private LPWAN. However, NB-IoT and GSM already offer five-fold redundancy at most locations without the need to install a new network. NB-IoT, GSM and also LoRaWAN offer the possibility to acknowledge an emergency call as often as you like per day. Sigfox works in the upload without automatic acknowledgement and offers in the download only four messages with 8-byte acknowledgement per day. Sigfox, therefore, offers the worst network coverage for the community of Kirchheim and, on top of that, the most insecure connection quality, because you have to do without the acknowledgement of the message after four messages per day. I can therefore not recommend Sigfox for emergency call applications.

Hopefully, we were able to stimulate a few ideas with this short article. Anyone who is planning some kind of emergency button is welcome to send an email. Inquiries about workshops, consulting, development of LPWAN devices up to the development of customized, integrated antennas are welcome at harald.naumann(at)lte-modem.com.