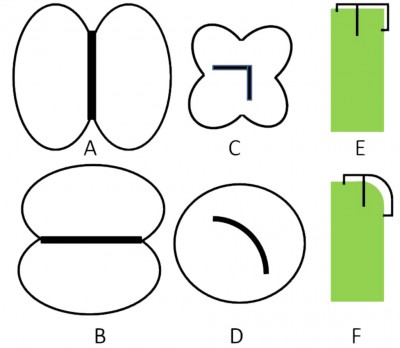 The antenna is always the key to success for your wireless application. Each antenna has its benefits and drawbacks. The selection of the right antenna at beginning of a development project, or if you are planning the development of a device around the antenna, could save you a lot of money.

The picture shows the typical radiation pattern in 2D of a monopole antenna. It shows the typical two directional null in the pattern. If you are, for example, directly under an antenna tower then you will receive no signal. A sensor with a wireless link for the Internet of Things has to follow the same rules for radiation of radio waves as well. The main difference is that an indoor sensor will have a chance of receiving reflections of the radio waves. Even if the home automation server is in the region of the directional null, the server may receive something. At 868 MHz and 915 MHz, the refection of radio waves indoors is reasonable. At 2400 MHz, where Classic Bluetooth, Bluetooth Low Energy, and ZigBee operate, the 868/915 MHz reflections are much lower. The walls of a house will absorb a significant proportion of the radio waves.

If you bend a monopole, then the result is the addition of the curve of a vertically polarised antenna plus a horizontal polarised including a loss of at least 3 dB gain. The loss in the gain is acceptable, because the null directions are now absent.

A loop antenna can be designed smaller than an L antenna or an inverted F antenna. All three antenna shapes can be bent.

Based on the circular shape the null directions will be eliminated. The circularly shaped antenna can also be an L antenna or an inverted F antenna.

If I can, I prefer to use the inverted F antenna in designs, because it can be easily tuned for impedance and resonant frequency. The length of the radiator can be adjusted by scratching metal from the track on the PCB to tune the centre frequency. The shorting link can be used to match the antenna impendence. If you do the job right, then there is no need for further components between the output of the RF module or IC and its recommended balun. Be aware, that the 50 Ohm impedance is the theoretical value. If you follow the design guidelines of the manufacturer then you will get something close to 50 Ohm, but it could be also 40 Ohm or 60 Ohm. Remember that the size of the PCB, which is usually also the size of the ground plane, the plastic of your enclosure, the thickness of the plastic and the distance to the plastic will influence your impedance as well. If you select an inverted F antenna, you have the latitude to reduce the impedance of the antenna to 40 Ohm. As a first step find the antenna’s resonant frequency. You use a spectrum analyser and change the frequency of the RF module or IC from 860 to 880 MHz. At 871 MHz you may find, for example, a peak. As the next step, you change the shorting link and shift the shorting left and right. By moving in one direction, you will see that the peak on the spectrum analyser rising. When you have the highest peak you have your position to adjust the antenna radiator by scratching the copper.

If you try the same with a loop antenna, then it is much more difficult. The loop antenna is closed on both ends. On one end there is the shorting link and on the other end is a connection to ground. On this connection to ground, you will often find capacitors and inductors. Last but not least you can try to match the antenna on impedance as well. Last but not least you can try to match the antenna on impedance as well. The silver bullet is to first check the real output impedance of the wireless module by network analyser and then maybe to simulate an antenna with the right impedance (e.g 40 Ohm instead of 50 Ohm). This is the theory because in practice the simulation often does not match reality. A practical approach is to start with an antenna shape which has been tested before. The best option is to talk to a local Field Application Engineer first and to ask for advice. Such an FAE with a focus on Wireless will be able to select the right antenna for you. The FAE will hopefully not select a ceramic chip antenna because they always come with two null directions. If the right shape is selected, then you can start by developing of empty PCBs and antenna. Maybe you will choose to put the IC with its balun or the radio module on the PCB as well. All big metal parts like batteries should also be already on the PCBs. A function is not needed. If there is a big display with metal frame or buttons with metal parts, then put them on the empty PCB as well. Develop some empty PCBs with different antenna shapes and start to test. Follow the same process with any other SMT mounted antennas as well. Even PCB antennas with coaxial cable can be checked using the same approach. For off of the shelf antennas, you cannot change the printed shape.  Sometimes you get the same antenna with different centre frequency. Other antennas you can tune with a stub. A stub is a short PCB track at the end of the antenna.

This short article is based on a meeting with a customer. As a first step, they had already replaced the monopole antennas that came with the RF module with some other antennas. In the sensor, a piece of wire gave a better result than the antenna on the module. At the HA server, the internal antenna was replaced by a coaxial cable with an external helical antenna. The range jumped from a few meters to a reasonable distance. With the redesign, the antenna at the server will be replaced by an internal PCB antenna with round shape. With a little luck, we can use an inverted F antenna. As a worst case, we have to select the loop antenna. We need an omnidirectional radiation pattern because nobody knows where the sensors will be placed. There will be at least one test PCB – maybe more and the results will be hand over to a highly experienced RF engineer. The customer may decide to place the order for the test PCB directly with an engineering firm with high skills in RF.
The antenna selection for the sensors is another story. I will keep you posted.
And those who want to read more about wireless applications are invited to have a look at the IoT M2M Cookbook: http://www.gsm-modem.de/M2M/m2m_iot_cookbook/

Has this article piqued your interest? Do you plan your own wireless IoT device? Do you plan to deploy IoT devices with embedded antennas? Do you have an IoT prototype and need to optimise the design or minimise the price? If you have answered YES to any one of these questions then please do not hesitate to drop an email to harald.naumann (at) lte-modem.com and to ask for a proposal or some engineering services to make your IoT idea a cost-effective reality.