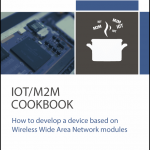 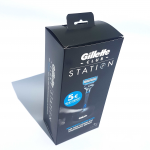 In 2016, a creative team in Frankfurt had the idea of developing an IoT push button for ordering goods via a cellular module. In principle, something similar to the Amazon Dash button, only using a GSM radio instead of Wi-Fi. A first, and a tricky learning curve for the engineering team. The developers in the […]

This quarter I have a lot of IoT / M2M news for you: 1. Update IoT / M2M Cookbook Since 4 weeks the update is on the server, listed here: http://www.gsm-modem.de/M2M/m2m_iot_cookbook/ More than 12 pages are related to ceramic chip loop antennas for GPS/GLONASS and Bluetooth. Loop antennas have no hand effect and will not […]

IoT / M2M question by email to me: Q: Hi Harald,I found you on m2m.com forum discussion. I am an M2M enthusiast building an M2M PoC. I noticed in one of the m2m.com forum thread you suggested to Wakeup devices using SMS or Voice call. ie. Bootstrap to the GPRS network. I would like to […] 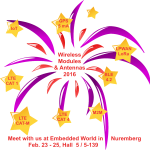 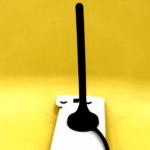 Our third patient has a popular name. The manufacturers have called it the magnetic mount antenna. Further details about the third mobile antenna patient are given in the test below. Here are the medical records of the cellular magnetic mount antenna: Frequency bands: GSM 850/900 MHz, GSM 1800 / 1900 MHz, UMTS 2100 Frequency range: […] 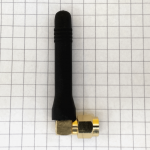 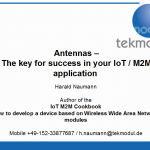 The topic on this evening was “Wireless Technologies for IoT – Antennas and Beacons”. http://www.meetup.com/IoTMunich/events/219391820/?_af_eid=219391820&_af=event&a=uc1_te Thanks to all participants. If I am informed right then 75 out of 148 people with interest in IoT stayed and listened on this evening. Thank you for all the interesting meetings during the event. Nevertheless, I already got several […]