In 2016, a creative team in Frankfurt had the idea of developing an IoT push button for ordering goods via a cellular module. In principle, something similar to the Amazon Dash button, only using a GSM radio instead of Wi-Fi. A first, and a tricky learning curve for the engineering team.

The developers in the IoT button team used the large, well-known Internet search engine to research information about ways to build GSM antennas and design them into a product. They found, amongst other things, the author’s IoT-M2M blog [1]. When registered as a reader of the blog, the IoT button team also received automatic emails of new blog posts and an update of the IoT / M2M Cookbook [2]. The fact that the purchaser of the IoT / M2M Cookbook planned to develop an order button for Gillette so that customers could order razor blades by push-button, was still secret at this time. 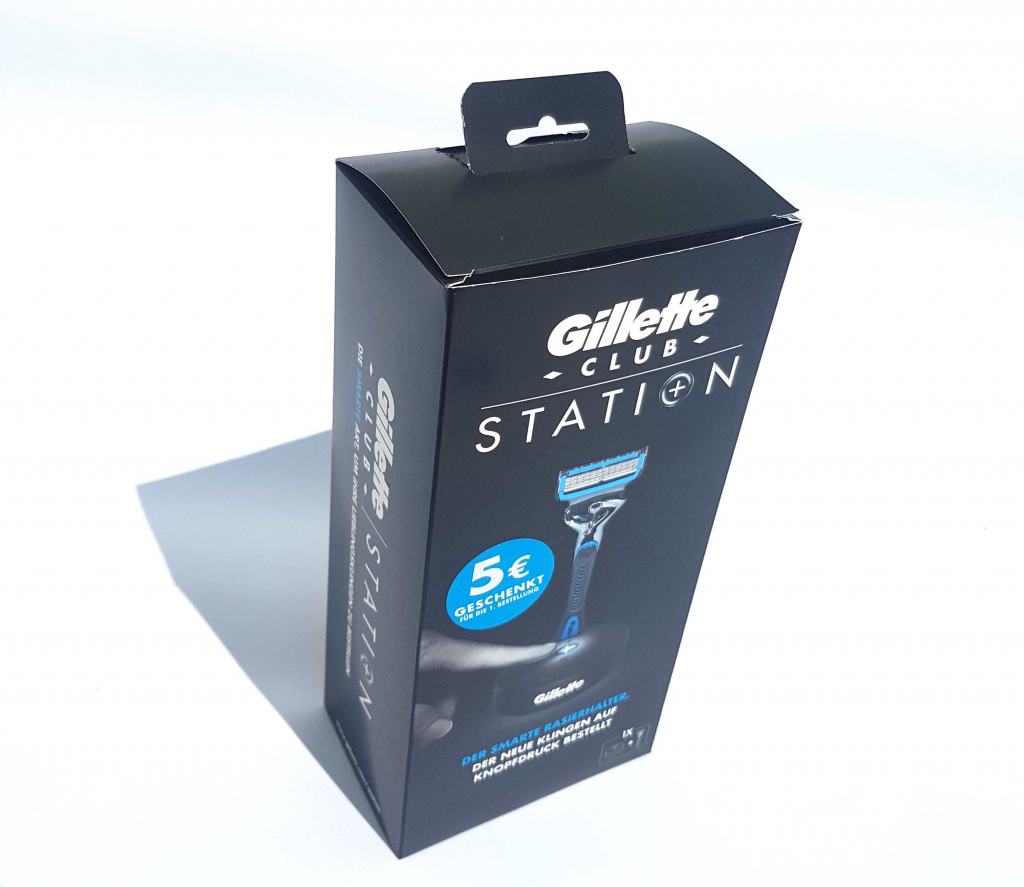 © Harald Naumann – Currently only available in Austria, Gillette offers its customers the capability to order new razor blades at the touch of a button.

In the IoT / M2M Cookbook, the author describes in detail how to build your own GSM-PCB antenna. The design of the antenna is described in different variants. The antenna design was so perfectly documented that it worked immediately in the IoT button prototype. At the same time, this self-built GSM antenna also fulfils the demand for an extremely low price point because it is based on a few conductor track segments. Being part of the layout of the printed circuit board, it does not cost even one extra cent and it saves the assembly costs for an SMD mounted antenna. No one can undercut this rock bottom price of 0.0 Dollar.

On the way to the mass production

In the following phase, IoT projects are often followed by the further optimisation of production costs, the reduction of the mechanical dimensions and the matching or tuning of the antenna. The IoT button also needed to go through this important process. In this phase, the work was given to an external engineering service company which had the necessary expensive measuring equipment for measuring antennas. Unfortunately, the IoT button performance was badly degraded as a result. It was scaled down in size. The antenna in the circuit board was exchanged for a cheap Flex-PCB antenna with bad antenna parameters in order to reduce the installation space. In this version, the IoT button, although smaller with the Flex-PCB antenna became more expensive to manufacture and no longer worked correctly.

In the case of non-functioning design, problems with EMC radiation, interference by harmonic waves in the measurements of the RED (Radio Equipment Directive, formerly R&TTE -Radio and Telecommunication Terminal Equipment Directive) and other complex technical problems related to analogue design, many hardware developers ask for advice from the author of the IoT / M2M Cookbook [2]. The developers of the IoT button also asked the author for advice.

The author set up a meeting with an experienced RF developer: the Technical Manager of Triptec, Wilhelm Oelers, whom he contacted through the akorIoT network.

Together with the book author, the RF developer visited the project manager of the IoT button. During a cup of coffee, the modalities were clarified and after the measurement of the return loss of the antenna, the order to rework the printed circuit board was placed. The PCB antenna out of the IoT / M2M Cookbook [2] went back without increasing the PCB size. By replacing the Flex PCB antenna, the production costs were reduced again and the measurements after RED were successfully completed.

In addition, the antenna was optimized from Quad band GSM to NB-IoT (LTE-Cat NB1) in Band 8 and Band 20. With less effort, the IoT button can now quickly redesigned to work over NB-IoT. Further methods to reduce costs were the use of two-layer PCBs and the removal of unnecessary components on the PCB.

During the GSM stress test, extreme operating conditions are tested. For this, a GSM tester simulates a GSM base station and asks for the maximum transmission power of 2 Watt (33 dBm) from the remote site. In the 2 Watt TX mode, the IoT button was able to send 520 orders on one set of three conventional Alkaline AA cells.

In actual use, the IoT button would be expected to place an order every two weeks. This equates to 26 orders for razor blades per year. This gives a theoretical expected useful life of 20 years for the worst case transmission scenario using a set of three AA batteries. However, in present GSM networks, the used TX power of IoT devices on GSM is generally much less than 33 dBm and so the energy of the batteries is sufficient for thousands of orders. Clearly, the ageing and self-discharging of the AA cells are the limiting factors that will require the batteries to be replaced. 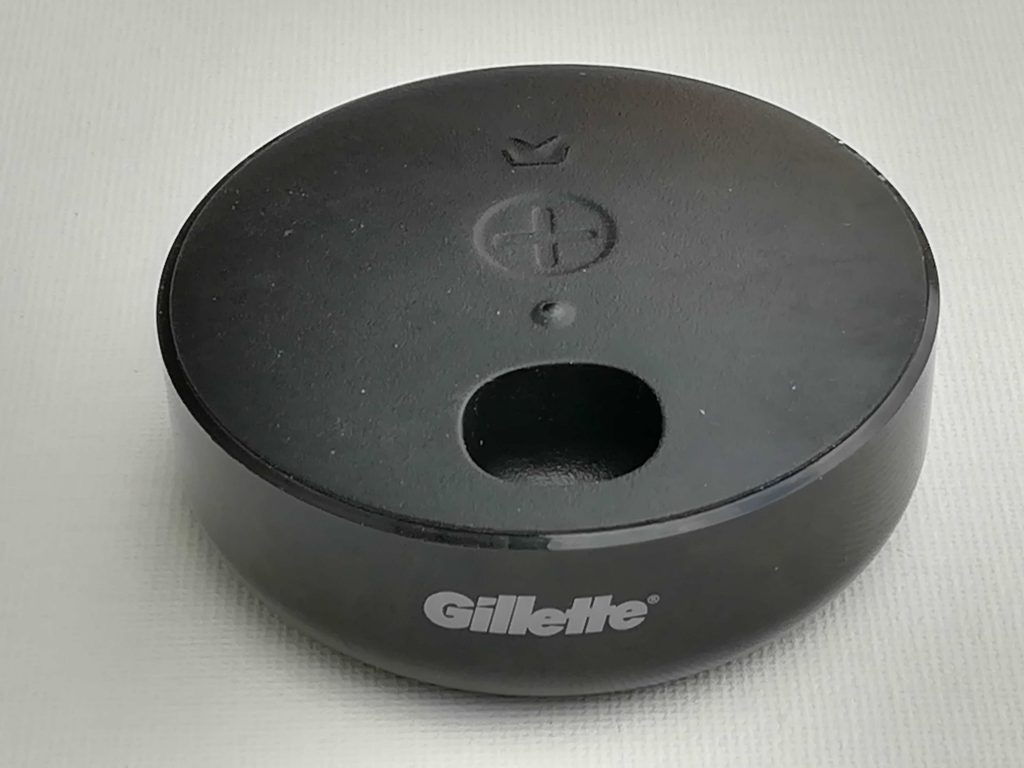 © Harald Naumann – A pressure on “+” is enough and the owner of the Gillette Club Station is supplied with new razor blades.

The electronics of the IoT button was now working perfectly and the cost was optimised.  At this point, the designer suggested a new housing. The button is a lifestyle product, probably placed in plain sight in a customer’s bathroom and so needs a beautiful shape. Such an IoT button is not used only by unmarried nerds, but also must pass the quality control of the wife or partner. 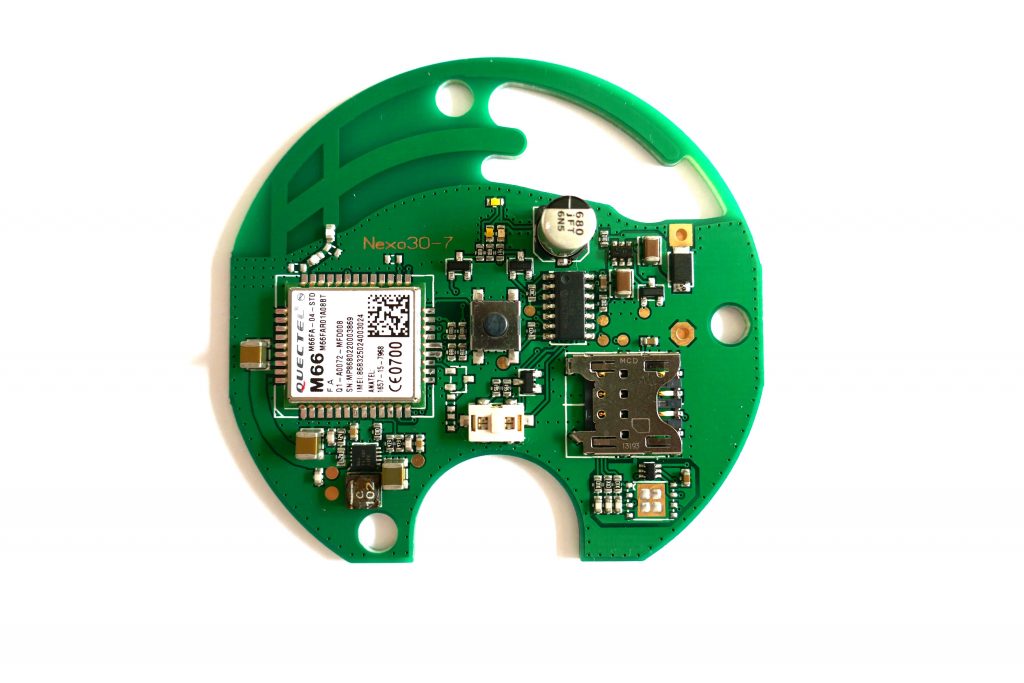 © Harald Naumann – The circuit board of the IoT button by Gillette. It contains a GSM module, which can also be exchanged against a pin-compatible NB-IoT radio module.

Rectangular chip antennas do not fit into round corners. The GSM-PCB antenna does. It can be easily adapted to the new, round shape on the circuit board and can be optimised by practical test setups. Compared to this, a simulation is much more expensive and also time-consuming as for round structures the simulation software takes too long to run. In this phase of the project, copper foil and a craft knife are used and the cut foil is glued to the circuit board. Once the optimal structure is found, a new PCB can be ordered. This PCB is then measured again in the housing and the radiator is shortened by scratching or lengthened by soldering copper foil.

If the designer then changes the material of the plastic for the housing, the thickness of the plastic or the material of the PCB, then the process must be repeated. The antennas must be adapted and optimized again. Details on this can be found in the IoT / M2M Cookbook [2].  It is important to have control over the manufacturing process so that “innocent” changes to the housing do not result in the mass manufacture of devices with de-tuned antennas!

Now the developer of an IoT device nearly everything managed. The next hurdle is the Buyer. Buyers have the mission to lower production costs. If the purchaser changes the supplier for the capacitors or inductances in the antenna-matching network in order to save costs, the antenna matching must be measured again. Each inductor behaves a bit like a capacitor and each capacitor behaves a bit like an inductor. However, this varies from manufacturer to manufacturer. If the purchaser wishes to make a change to the components in the matching network, the new parts must have the same nominal values for capacitance and inductance – and must be tested and matched once again. 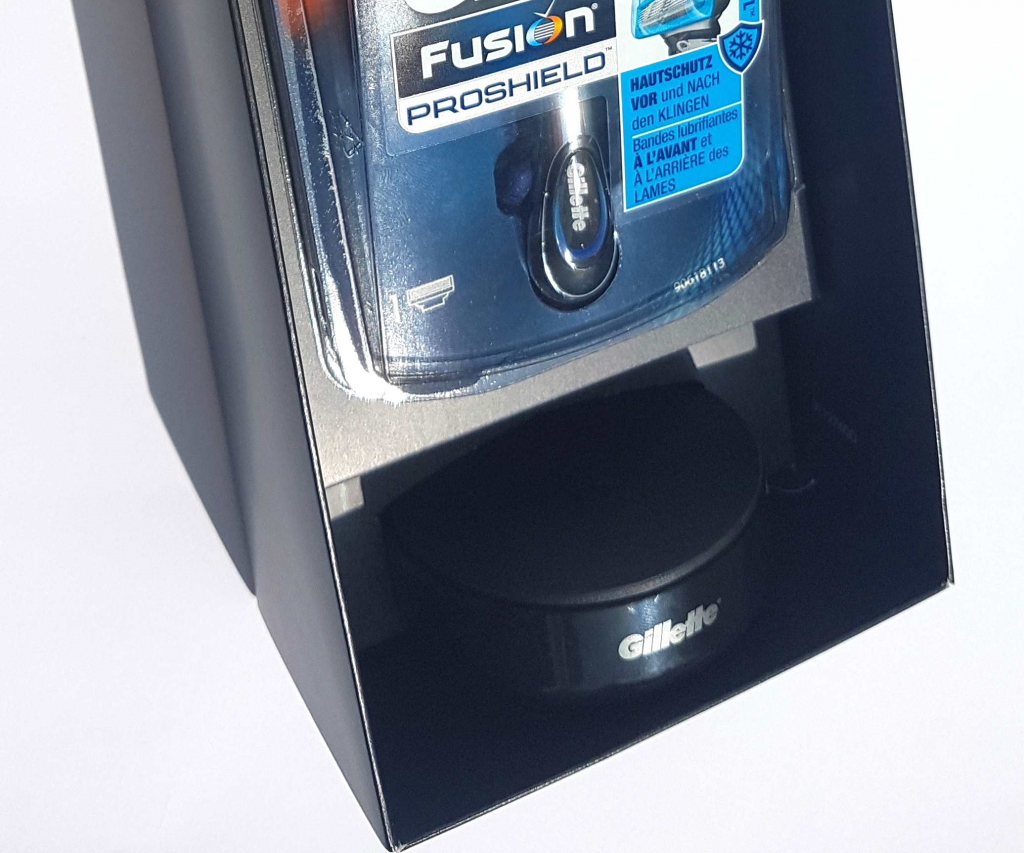 The IoT button is now ready and has been tested at Eurofins in Reichenwalde to RED and It can bear the CE symbol.

The IoT button to order Gillette razor blades is produced by Nexolink Solutions AG based in Frankfurt. 14,000 Gillette order buttons have already been delivered to supermarkets and online shops in Austria. With its IoT button, Nexolink has developed a complete solution with a waterproof and stylish design for the ordering button plus all the software for the ordering processes that must run in the background.

For data transmission, the developers selected a GSM module. Mobile communication on the GSM standard has the advantage of near universal coverage in all countries of Europe and many other countries in other continents. No other wireless network offers such good deep indoor coverage in buildings as the good, old and proven GSM standard.

The world does not just consist of IoT order buttons. Other much more complex rounded antennas can be found such as the GSM / GPS tracker with inductive charger from Prothelis or the LTE camera Buddyguard Flare, developed by Pikkerton. The possibilities and applications are endless. If you have an idea for a wireless IoT device, the book author Harald Naumann is ready to assist you with the development.

Meet the author, Harald Naumann, at the Wireless Congress Systems & Applications 2017 in Munich. He will speak in the day 1 session titled: “Tutorial: Antenna, Self-Made Embedded Antenna Design versus Chip Antenna, Designing and testing antennas from wireless prototype to production.“ http://www.wireless-congress.com 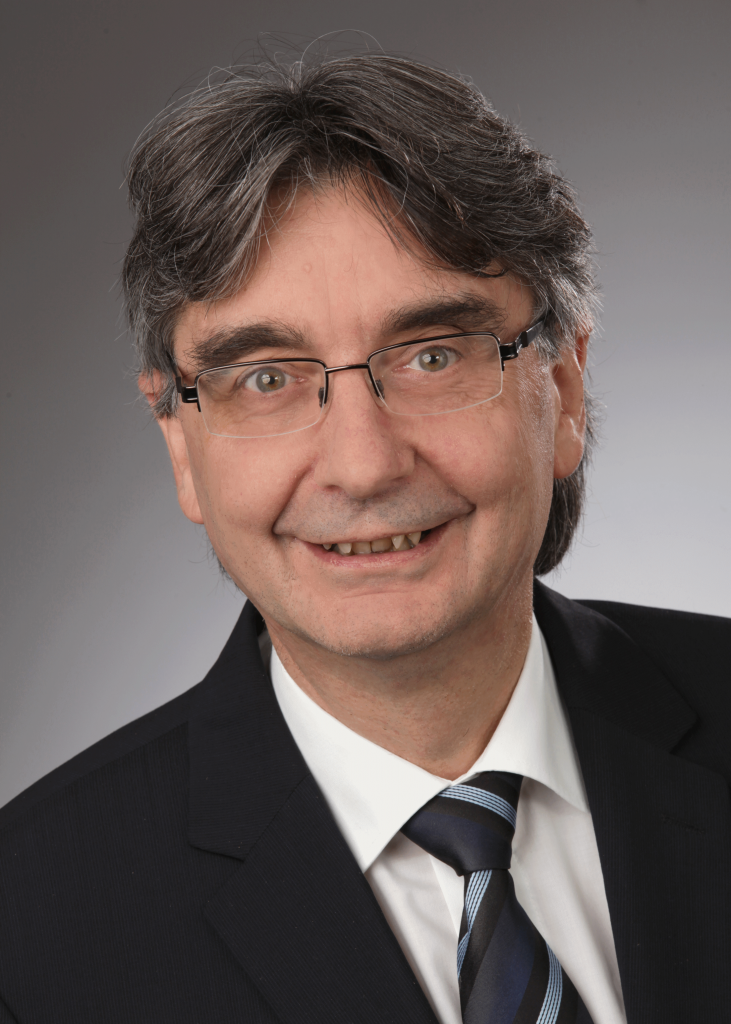 A self-confessed dry-shaver, Mr Naumann was born in Kirchheim, Germany and completed his education as a certified engineer in Offenbach, focusing on information electronics. He was a member of many teams for the development of radio products – today called “Wireless IoT”. He has been active in the field of radio technology for over 25 years. In 2014 Naumann published his first book in his own publishing house with the “IoT / M2M Cookbook”. Today he is the Sales Director at Tekmodul in Munich.