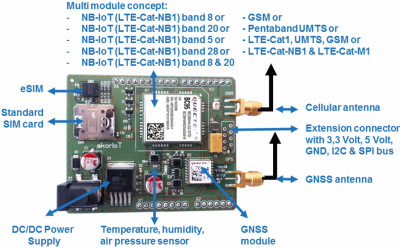 “akor” is the Proto-Celtic word for “open”. The akorIoT radio adapter with its Arduino R3 header has an open HW and SW concept and supports the multi-mode cellular module B96 as well. Based on that it is the world’s first Arduino shield with the support of both new cellular LPWAN technologies LTE-Cat-NB1 (NB-IoT) and LTE-Cat-M1. On top, there is the support of the common EGPRS. The NB-IoT roll out in Europe has started and in regions without the support of NB-IoT common EGPRS will be used.

The BG96 is a multi-mode module and supports three cellular technologies (LTE Cat-M1, LTE-Cat-NB1 and EGPRS) based on the Qualcomm 9×06 chipset. It supports a maximum data rate of 375kbps in the downlink. It offers an ultra-low power consumption and provides pin-to-pin compatibility with Quectel LTE Cat-1 module EG91, Cat-NB1 (NB-IoT) module BC95, UMTS/HSPA modules UG95/UG96 and GSM/GPRS module M95. With its SMT form factor of 22.5mm × 26.5mm × 2.3mm and high integration level, BG96 enables IoT developers an easy design of low power and inexpensive IoT applications.

The IoT / M2M Cookbook is intended to help developers of wireless applications to save some time and perhaps to provide some inspiring ideas. It is a book for makers, and the goal of this book is to guide developers from the concept stage of an IoT / M2M device all the way to the final mass-produced product. The book will provide initial details such as how a self-made inverted F cellular antenna works.
Read more: http://www.gsm-modem.de/M2M/m2m_iot_cookbook/

The next step will be to plug the akorIoT radio adapter on one of the MCU kits with Arduino header. The STM32 Nucleo evaluation kits give you the freedom to select from 33 different versions: 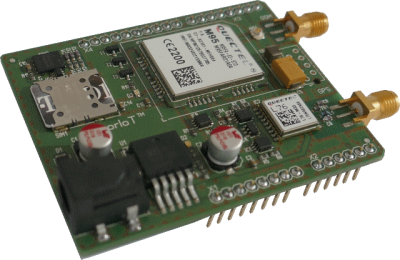 akorIoT radio adapters are tested on Arduino UNO and are optimised for STM32 Nucleo, because Nucleo kits offer always more than one UART. One UART will be used for the cellular module and the other for the GPS module. However, the Intel Galileo eval kit offers two UARTs as well. The Raspberry PI will be supported by a common PI to Arduino extension adapter.
Read more: http://iot-university.org

Step 3 – Write your first own code

The Nucleo kits on ARM Cortex Mx are usually enabled for the cloud-based environment ARM mbed C Complier. Based on the open akorIoT philosophy you can easily migrate code developed with the cloud-based mbed C compiler to the ARM supported IDE for free EmBitz. With both IDEs, you will be able to access to the multi-sensor or the GPS module on the akorIoT radio adapter. 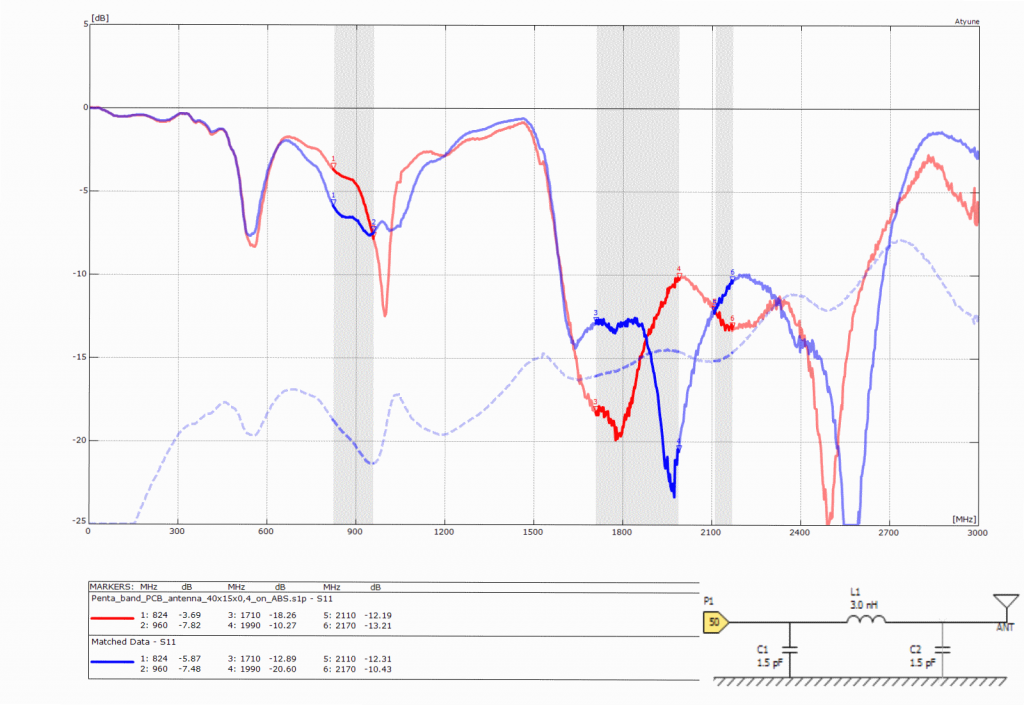 If you plan a device with embedded antennas then it is highly recommended to develop some “empty” test PCBs with the selected antennas and U.FL plugs. The U.FL plugs will be used to feed the antennas with a Vector Network Analyser. The testing and optimisation can be done by your HW team or by the akorIoT team

Step 5 – Power on of your first PCBs
The code developed at step 2 you will load to your PCB and start with field test. After the field test, you will add the experience to the next version of your PCB, and further field tests will follow.

Does this new akorIoT radio adapter gained your interest? Do you have a wireless IoT idea? Do you plan an IoT device with embedded antennas? Do you have an IoT prototype and have a need for optimisation or price? Your one answer is YES. Then do not hesitate to drop an email to harald.naumann (at) gsm-modem.de and to ask for an akorIoT radio adapter or some engineering services to make your IoT idea real.