akorIoT is a portmanteau word from “akor” and “IoT“. “Akor” is the ancient Celtic word for “open”. The goal of the akorIoT SensPRO was to create an open platform similar to the idea of a Programmable Logic Controller (PLC). As with a PLC the programmability, storage of the program in memory and the execution of the program are provided. Unlike a PLC the program code is not executed with an interpreter, programming is done in C with free-of-charge C compilers. The block diagram of the akorIoT SensPRO is disclosed as it is for a PLC.  The addresses of the sensors on the main board, I2C bus, UART, counter, AD converter and much more can be reached by the programmer with their own code. 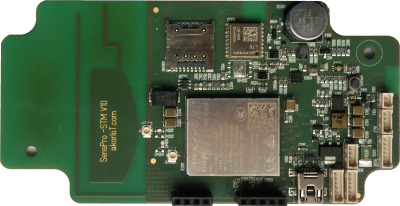 NB-IoT, LTE-M, GSM and optionally BLE and Wi-Fi are available for wireless communications. Location services are achieved either via GNSS, Wi-Fi, BLE or cell locating via GSM, NB-IoT or LTE-M. Further radio modules and sensors can be attached using the expansion connector via I2C and UART.

SensPRO is a portmanteau word made of “sensor” and “professional”. 7 sensors are already provided on the main board. Additional sensors can be quickly and inexpensively incorporated via I2C and UART via expansion connectors. This upgrade can either be done by the akorIoT group or by the SensPRO customer. If the customer wishes to expand the akorIoT SensPRO themselves, then they can if they wish get advice and support from experienced IoT developers from the akorIoT group. “akor” means “open” and the members of the group are therefore happy to share their knowledge and experience.

The SensPRO design is not cast in stone. The size and shape can be customized by the akorIoT group. The SensPRO customer can purchase the circuit diagrams, integrate them into their circuit and create their own new, unique IoT device. Furthermore, they can, if desired, request support from the developers of the akorIoT boards. 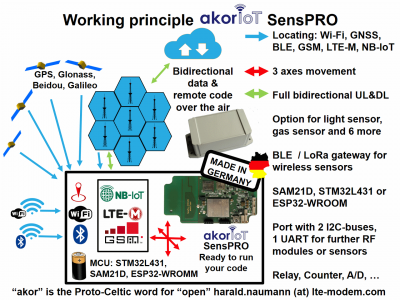 The basic version of the SensPRO is capable of covering more than 20 applications. Some of the applications are also supported directly by the example soft programs provided. The sensor data or GNSS data are read by the microcontroller and then transferred to the akorCLOUD. The akorCLOUD is available to the SensPRO customer free of charge for 3 months. The akorCLOUD is not only used to visualize the measurement data, but also manages the program code of the SensPRO in the field. With SensPROs the program code can be exchanged remotely. The wireless sensor can be sent to Australia or Canada and be programmed from the beach in the Maldives or the way up on the Rocky Mountains. You have full control over your SensPRO anywhere in the world.

Programming is the next key area of support. If your team doesn’t have any capacity available, a software developer from the akorIoT group takes over the programming of the open SensPRO, the akorCLOUD or the app on a smartphone. 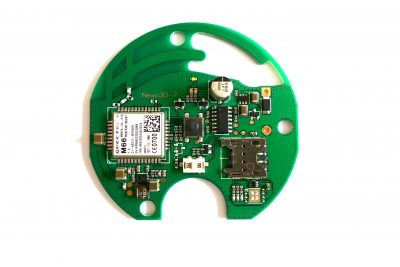 The circuit board of the Gillette IoT button. It contains a GSM module, which can also be exchanged against a pin-compatible NB-IoT radio module.

The SensPRO is used in many applications without hardware modification. This reduces the development costs in an IoT project to 0 USD. If sensors are not required, the assembly can be left out at the customer’s request. The Bill of Materials for the antenna in the SensPRO has already reached 0 USD because a multi-band PCB antenna is used in the motherboard.

In 2018 the akorIoT group leads the development of customer specific antennas for NB-IoT and LTE-M. The reasons customers require custom antennas are multifaceted. The Gillette order button for Nexolink was produced under price pressure. The antenna was integrated into the main board and the board was designed with only two layers. The originally square enclosure was turned into a round window in the final phase of development. Square chip antennas do not fit into round enclosures and are extremely expensive compared to round PCB layout antennas. On a 23 mm x 100 mm ground plane we have shifted the antenna into the third dimension. The antenna challenge was solved in such a small space by using etched and curved tin plating. We have even fitted antennas in a bicycle frame .

Different manufacturing techniques are used to reduce costs and optimize the performance of the antennas. Antenna examples: Planar in FR4 in the main board, FR4 at right angles to the main board, FR4 or Flex-PCB with coaxial cable, coiled wire, etched and bent tin plate up to customer-specific tools for ceramic antennas.

Wilhelm Oelers and Harald Naumann underline the openness of the idea creators of the akorIoT philosophy several times a year at seminars and workshops. Both have been active in wireless communication for over 30 years. Wilhelm and Harald can be met together as speakers at all-day seminars about LPWAN and BLE. The duo also presented workshops and lectures at the Weka Wireless Congress in Munich. Harald often quotes from his IoT / M2M Cookbook and Wilhelm measures antennas or puts akorIoT boards into operation in the presence of the participants.

The Quantec tracking device is a good example for an IoT development. Quantec first acquired the IoT/M2M Cookbook and quickly gained a good basic knowledge by reading the book. After that Quantec bought one of the akorIoT boards and did the Proof of Concept (PoC). The Quectel radio module and the MCU STM32L4xx were tested and then transferred to a new customer specific board. Quantel itself programmed the MCU and the server for the sensors in the construction industry.

Quantec’s successful path can also be followed by considering its IoT applications. By reading the IoT/M2M Cookbook you will gain an advantage from the collected knowledge it contains. A seminar or workshop may also be added to complement the leaning. It follows the PoC and at the same time allows for the possibility of discussing  your own PCB or the redesign of the akorIoT SensPRO into a new PCB with different dimensions and other sensors or functions.

Which path will you take now? Do the akorIoT SensPRO and the akorCLOUD match your wishes and requirements? Are you still missing something that you would like to see in products and services of the akorIoT group?

Talk to us. Ask for further references. Tell us your IoT idea. We will be happy to make a proposal for implementation. Thanks in advance for your email to harald.naumann (at) lte-modem.com