In nominal data, 15 economies would have GDP above $1 trillion, 62 have above $100 billion and 177 have above $1 billion. Top five economies account for approximately 53.82 %, whereas top ten accounts for approx. 67.19 %. top 20 economies add up to over 80%. 92 smallest economies only contribute 1 % to global wealth and 154 lowest ranked constitute only 10 % of the total. Source: http://statisticstimes.com/economy/countries-by-projected-gdp.php

LPWAN exception – detect it yourself

Most of the top 30 economies already have or will have at least one NB-IoT network. In Dresden Germany, we already have in October 2017 25 NB-IoT base stations. This means less than 5 km2 coverage per NB-IoT BTS.
In the same time, SIGFOX in France was proud to cover the country with less than 1600 gateways end of 2016. One SIGFOX gateway has to cover more than 400 km2 in average. With such big cells it is impossible to get a useful indoor coverage for metering in the basement, elderly care in a flat or tracking of goods indoor.
For indoor applications, only the base station density will count. According to Nokia, we live 87% of our time indoors. Most of the IoT devices will be indoor for sure.
Decide yourself about the  LPWAN exception(s). 28 out of the top 30 economies are already on NB-IoT. The Netherlands already has more than 4000 NB-IoT BTS. With 25 NB-IoT BTS in the small city of Dresden, the German operator Telekom set a benchmark.

If you are interested in LPWAN (NB-IoT, Weightless, SIGFOX, LoRaWAN) or any other wireless technology then do not hesitate to ask for wireless modules and antennas by email to harald.naumann (at) lte-modem.com. 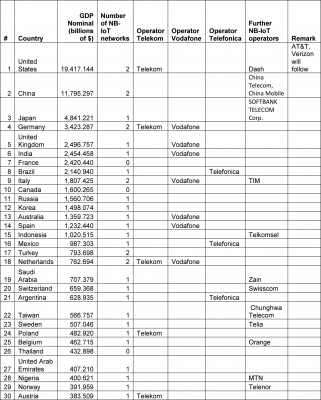