In order to minimize the risk, the developers of IoT devices try to avoid single source components and services. For microcontrollers and radio modules it becomes difficult, but mostly similar components from different manufacturers are used. The LPWAN technology has to be chosen sooner or later. NB-IoT and LTE-M are offered by different network operators in Germany and the USA. In Germany there are two network operators for NB-IoT, which cover the country more or less completely. The third network operator is a latecomer and now offers NB-IoT and LTE-M at the first roll-out. However, the third operator still lacks coverage. The two that first rolled out NB-IoT are both testing LTE-M. This means that sooner or later we will have three cellular network operators offering NB-IoT and LTE-M. We now have five network operators in the USA offering NB-IoT. In the USA, first LTE-M was rolled out and later NB-IoT was expanded. The first network operator for NB-IoT in the USA has its parent company in Germany. In Germany and the USA we have a healthy competition between the cellular network operators, which leads to a decrease of the prices for the communication costs per year. We in Germany pay one Euro per year for 50 MB upload or download. That corresponds to approx. 8 cent per month. 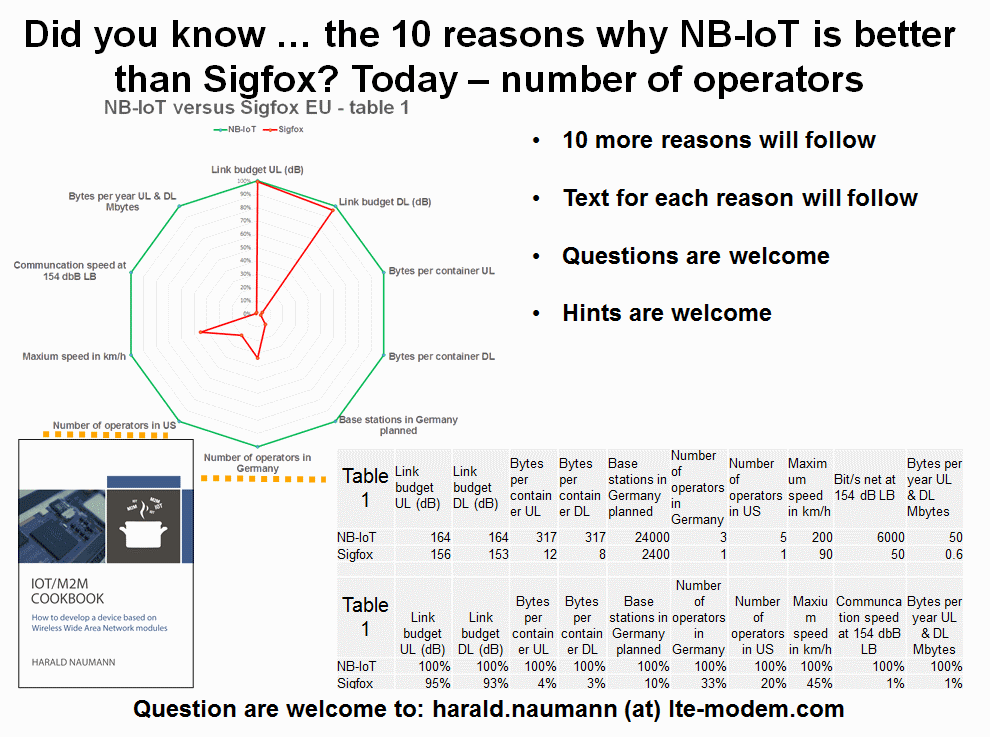 In the USA and Germany Sigfox operates a few gateways and then gives some percentage figures for network coverage in the respective countries. According to the Sigfox website, network coverage for Germany refers to outdoor coverage. This applies to all maps displayed on the website. 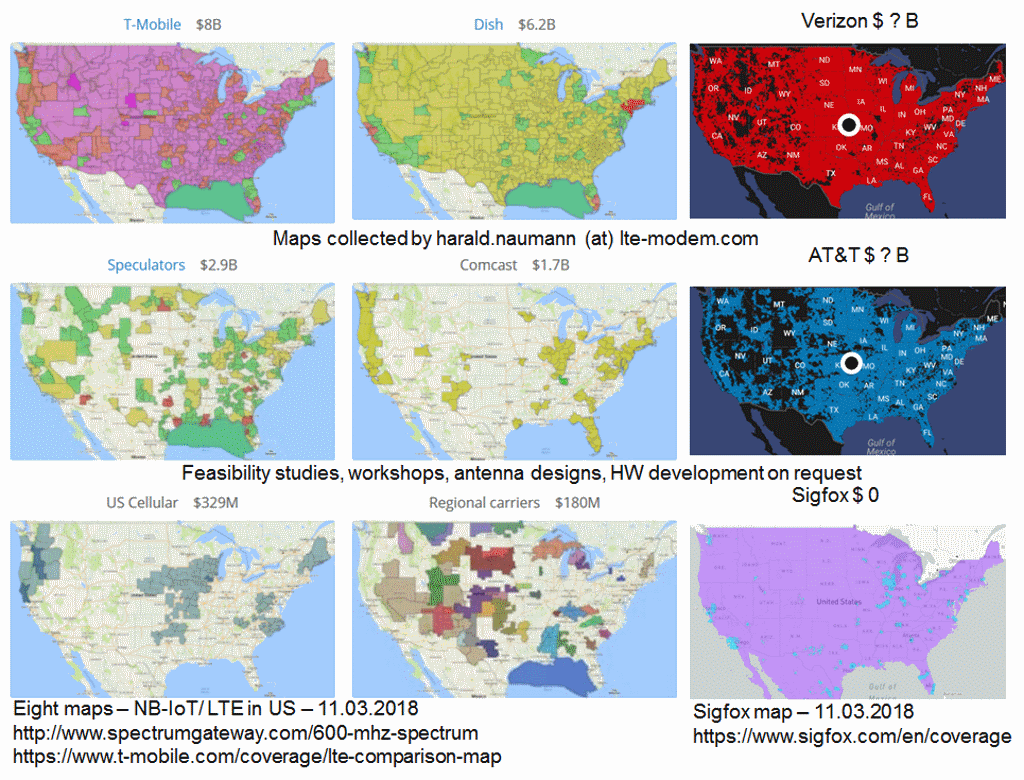 Cellular operators versus Sigfox in US

In our opinion, in the USA the coverage in percentages per inhabitant in metropolitan areas is fogging. If you access the map for the USA, you will notice that there is no coverage in the country. In USA the radio coverage by cellular network operators is much better in the country than the newcomer Sigfox. Cellular telephone networks were set up to make telephone calls. According to Nokia, we spend 87% of our time indoors. In order to animate the potential customer to make phone calls, you have to offer a coverage indoor. However, NB-IoT has 20 dB more link budget than the link budget for a telephone call. This means that where a telephone call is possible, NB-IoT is also possible. 20 dB more also means that you can push more walls or even into the basement.

Three or five network operators is significantly more than 1 network operator. 48,000 or even 72,000 is much more than the planned 2400. The more competition there is, the faster prices will drop. Exactly therefore we have in Germany with 1 ? lowest prices for LPWAN per year. However, one euro per year is not the cheapest price for NB-IoT worldwide. There are countries where NB-IoT is offered even cheaper. SIGFOX would like to achieve a much higher price than NB-IoT for a worse developed net, with clearly less data volume in the Upload and Download. Time will show to what extent the potential customer is willing to pay more for less service and on top of that take the risk of a single source.

Does this article gain your interest? Do you have a wireless IoT idea? Do you plan an IoT device with embedded antennas? Do you have an IoT prototype and have a need for optimisation or price? If your answer to any of these qustions is “YES”. Then do not hesitate to drop an email to harald.naumann (at) lte-modem.com and to ask for an akorIoT radio adapter or some engineering services to make your IoT idea reality.