In the introduction it was mentioned that the enclosure and the components close to the embedded antenna like battery or display will interfere. The size of your PCB will have an effect of the performance of your selected embedded antenna as well.

The dipole antenna is an antenna with two radiators. The length of the radiators is related to the wavelength of the frequency that has to be received. PCB track antennas or chip antennas have only one radiator. 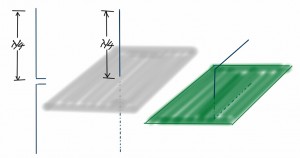 Where is the second radiator gone? The second radiator is now a part of the PCB. The real visible radiator you will be mirrored by the ground plane  of the PCB. If a mirror is to small then the “picture” in the mirror will not be shown completely. You will miss a part of the “picture”. If the ground plane is too small you will miss the antenna efficiency. The ground plane of small M2M devices is often a homogeneous area of copper on your PCB. The mass layer of your PCB can be the layer for the ground plane as well. Different mass layers on the PCB can be connected to one ground player by vias. The ground plane can be an inner layer of your PCB, too. The length of the antenna (radiator) is related to the wavelength. The size of your PCB is related to the lowest resonant frequency you would like to transmit or receive. At Bluetooth (2400 MHz) or Wireless-M-Bus (868 MHz) we have only one centre frequency. For cellular modules like GSM modules we already have different GSM bands in different countries. A GSM Quad Band module has to  support the American GSM 850 band. The lowest frequency at GSM 850 is 824 MHz. GSM Quad Band antennas will support the EU frequency range nice because in EU the lowest frequency in GSM is just 890 MHz. That means it is much easier to reach a reasonable performance in EU than in US. In EU we have no PTCRB or AT&T approval. As long as a M2M device in EU does not interfere the limits of the radio band it will pass. In the EU a manufacturer can measure and test in his own laboratory. In the US you are forced to use an external laboratory for the approval. Radio approvals will be explained in detail later. In North America they will test the Total Radiated Power (TRP). If your selected embedded GSM antenna does not offer enough antenna efficiency you will have no chance to pass. If you plan to enter the North American market it is highly recommended to select a consulter with skills in approvals for North America in an early stage of the M2M design. 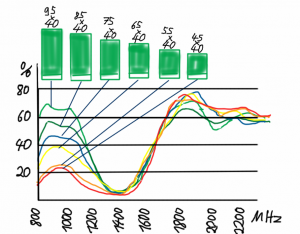 Embedded antenna and its ground plane. Antenna efficiency in % versus size of the PCB

The sketch shows what will happen by reducing the ground plane. Step by step the antenna efficiency will be reduced in the lower GSM bands. At the higher GSM band nearly nothing will happen. In the higher GSM bands the necessary ground plane is just the half than in GSM 850/900.  This effect is related to any GSM chip antenna or GSM PCB trace antenna. Even antennas for ISM 868/915 or 2400 MHz (ANT, Bluetooth, WIFI or ZigBee) have to follow the same rules. Nobody can cheat the physics. The conclusion is that not just the plastic enclosure or components close to the embedded antenna will interfere. The size of your PCB will effect the performance as well. Data sheets of embedded antennas tells the performance on optimal ground plane without enclosure. A real M2M device will have a PCB shape different from the reference design of the antenna and will have an enclosure as well. It will have big metal components like battery or maybe display close to the antenna as well. Nevertheless by investing in an own customised embedded antenna you can reduce the mentioned drawbacks a little bit.

We hope that this few lines will assist you and help you to design a proper working M2M device. If you are still not sure what to do or if you already run in trouble then it is highly recommended to ask for advice by a third party with skills in radio technology.