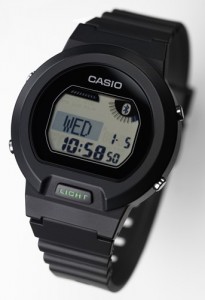 The nRF8001’s class-leading ultra-low power performance enables Casio’s prototype watch to benefit from the advantages of Bluetooth wireless technology while offering a similar battery life to a conventional Casio wristwatch. As such the Casio watch prototype can run from a single conventional CR2032 button-cell watch battery for up to two years, while providing up to 12-hours per day of continuous wireless communication with any Bluetooth v4.0-equipped smartphone or other device – due to start arriving later this year.

Nordic has been at the forefront of the group that defined the Bluetooth low energy specification since becoming a foundation member of Nokia’s Wibree Alliance in 2006 (the Alliance became part of the Bluetooth Special Interest Group (SIG) in June 2007). Nordic contributed decades of expertise – gained in producing successive generations of class-leading proprietary and interoperable (ANT/ANT+) ULP wireless connectivity solutions within a field it pioneered – to Bluetooth low energy wireless technology that is now a hallmark of the latest Bluetooth v4.0 specification.

Bluetooth low energy has been designed from the outset to extend Bluetooth wireless connectivity to compact, coin cell-powered devices such as watches. By ensuring interoperability with Bluetooth v4.0-equipped devices such as smartphones (which will start to appear on the market later this year), conventional wristwatches now have the potential to be equipped with an expanding range of brand new wireless features that could create a new growth segment within the traditional wristwatch market (especially among young people who have tended to favor their cell phones over watches to, for instance, tell the time).

Casio’s Bluetooth Low Energy Watch prototype shown at CES demonstrated some of the new functionality that Bluetooth low energy will support, including:

“From 1974 when Casio released its very first digital wristwatch, we recognized that long battery life was crucial for end-user convenience and so commercial success,” explains Etsuro Nakajima, Senior Manager within the Timepiece Division of Casio. “Now, thanks to Nordic Semiconductor’s technology, our customers will soon be able to wear a Bluetooth low energy-enabled Watch every day like a regular wristwatch without having to worry about frequent recharging cycles.”

Nakajima continues: “We know Nordic Semiconductor is a pioneer of ultra-low power wireless connectivity and its expertise in this technology is evident in the power consumption performance of the nRF8001 that was superior to other Bluetooth low energy chips we assessed. This performance allowed us to develop our Bluetooth Low Energy Watch prototype and offer the same battery life from a conventional coin cell as one of our existing watches. And allied with Nordic’s excellent technical experience and support, is why we intend to continue with further collaboration with the company.”

“Casio’s Bluetooth Low Energy Watch is exactly the kind of application we imagined could be possible all those years ago when we embarked on the development of Wibree that led directly to Bluetooth low energy,” comments Geir Langeland, Nordic Semiconductor’s Director of Sales & Marketing. “It is an honor to have our technology incorporated into Casio’s first Bluetooth Low Energy Watch prototype and particularly satisfying to see the promise of Bluetooth low energy start to become a reality after five years of foundational work.”

Casio Computer Co., Ltd. is one of the world’s leading
manufacturers of consumer electronics products and business equipment solutions. Since its establishment in 1957, Casio has strived to realize its corporate creed of “creativity and contribution” through the introduction of innovative and imaginative products. Today, Casio’s offerings include timepieces, digital cameras, electronic dictionaries, calculators, musical instruments, system equipment, and electronic components such as LCDs. The
Casio Group employs more than 12,000 people worldwide, shipping over 100 million products per year, with net sales of 427 billion yen (approx US$4,601 million) in the fiscal year ended March 2010.

Nordic is a member of the ANT+ Alliance and has successfully collaborated with ANT Wireless of Cochrane, Canada, since 2005. ANT devices such as the nRF24AP2 family – using Nordic 2.4GHz transceivers and the proven ANT protocol – have been used in millions of wireless sensor nodes across the world. ANT is perfectly suited for any kind of low data rate sensor network topologies in personal area networks (PANs) and practical wireless sensor networks (WSNs). ANT+ (built on the ANT protocol) facilitates interoperability between ANT+ Alliance member devices in application segments such as sports, wellness, and medical health sensors.

Nordic’s products are all manufactured in state of the art semiconductor process technologies through strong, long-term relationships with world-best manufacturing facilities. Sales are primarily made through a carefully selected worldwide distribution network.