LPWAN for a small village – not in Gaul (Latin: Gallia)

The year is 2019 Anno Domini, and cellular operators occupy all Hessian and a lot of them have imperfect indoor coverage in the basement of houses. Well, not entirely… One small village of indomitable Hessians plans to change it. However, how can Harald, Martin and their friends win against the invading cellular operators? 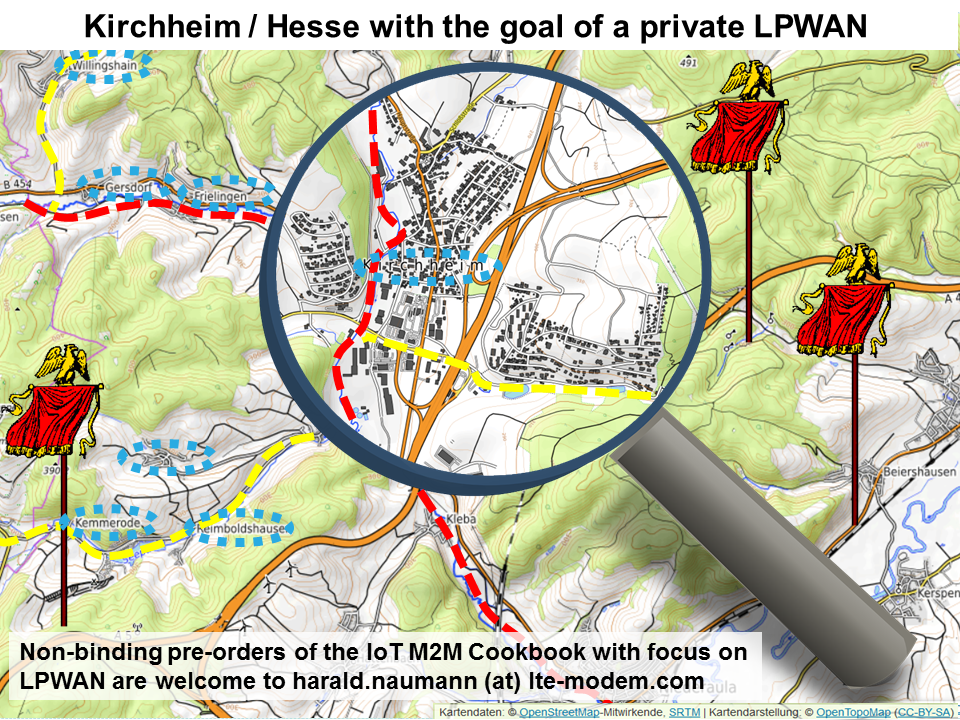 Private LPWAN for Kirchheim in Hesse

He is a brave and clever IoT evangelist of somewhat typical German size. He has read a lot about wireless and antennas and believes that private Low Power Wide Area Networks are a useful option for a public LPWAN.  Harald wrote the IoT M2M Cookbook and disclosed design guidelines for a GSM /NB-IoT antenna there.  Furthermore, he is one of the inventors of the akorIoT SensPRO reference designs with NB-IoT, LTE-M, GSM, GNSS, 7 sensors and expansion connectors. Read an excerpt of the first IoT M2M Cookbook here: http://www.gsm-modem.de/M2M/m2m_iot_cookbook/

Martin is Harald’s younger brother and runs the greenhouses in the small village. A GSM-based temperature sensor already protects the greenhouses but there is a need for further sensors recording soil humidity and a burglar alarm. Water usage is already restricted in Germany.

Who are the friends?

The friends are businesspersons in different fields, but all are employees and senior citizens of the small village as well.

Three of the friends run construction companies.  One of them runs the biggest foundation construction companies in Hesse; another one in is in building construction, and the third is in production plants for concrete. For the little machines and for the accessories for example diggers, there is no inexpensive protection system available on cellular right now. Moreover, the cellular-based systems that do exist are not supported by network operators in all regions where they run their business.

The small village has four petrol stations, three American fast food restaurants (MacDonald’s, Burger King, and Subway), a large parking lot for 120 trucks, 3 buses, 30 cars and 2 washing facilities for trucks.  Kirchheim has experience traffic growth due to the motorway junction. However, traffic also means air pollution from fine dust from diesel engines and tyre abrasion. Sensors for the parking lots and sensors for the air quality are useful there. Furthermore, alarm devices in the truck and on the loading area are also desirable.

We live in an ageing society. This is also a problem in the small village as well. In Germany, we have a saying: “An ancient tree is not  one to transplant”. In English, one says, “You cannot shift an old tree without it dying”. Studies show that people would like to live in their homes as long as possible. The old peoples’ home is undesirable.

There are many more entrepreneurs in the small town. The farmers are interested in getting details regarding their fields. Pregnant pigs are also a hot topic, because they often kill accidentally one or two of the piglets. An alarm would also be helpful before or at the birth of cows and horses. We will return later to the other entrepreneurs.

Kirchheim
Kirchheim lies in the southern foothills of the Knüll Mountains in the valley of the Aula. In the village, the Gossmannsroeder  and the Waelsebach rivers flow into the Aula in the north and the Ibra in the south. In addition to the main town of Kirchheim, the municipality consists of the districts of Allendorf, Frielingen, Gersdorf, Gershausen, Goßmannsrode, Heddersdorf, Kemmerode, Reckerode, Reimboldshausen, Rotterterode and Willingshain. Due to the many villages in the wide valleys and hollows the setup of an LPWAN is not easy. Harald was born in Kirchheim and knows every sandbox and every good location for a private LPWAN antenna system.

Gaul
Gaul (Latin: Gallia) was a region of Western Europe during the Iron Age that was inhabited by Celtic tribes. Julius Caesar finally subdued the remaining parts of Gaul in his campaigns of 58 to 51 BC.
https://en.wikipedia.org/wiki/Gaul

Hesse
Hesse or Hessian is a federal state (province) of the Federal Republic of Germany, with just over six million inhabitants. The state capital is Wiesbaden; the largest city is “Frankfurt am Main”.
Source: https://en.wikipedia.org/wiki/Hesse

Anno Domini
The terms Anno Domini (AD) and Before Christ (BC) are in use to label number years in the Julian and Gregorian calendars. The term Anno Domini is Medieval Latin, which means in the year of our Lord.

Romans and the Teutons
The history of the Romans in Germania covers a period of about five hundred years. In 55 BC Caesar crossed the Rhine for the first time with troops. From 13/12 B.C. general Drusus led several campaigns under Augustus to Germania.  The ultimately futile attempts to turn the area on the right bank of the Rhine up to the Elbe into a province lasted almost 30 years. The south of today’s Germany was cultivated by Romans. In the 5th century AD the Western Roman Empire collapsed under the pressure of Germanic tribes. The area around Kirchheim near Bad Hersfeld was never occupied by the Romans. https://en.wikipedia.org/wiki/Germanic_peoples

Celts
The Celtic settlement area was subjected to cruel wars by the Romans advancing north and the Teutons advancing southwest. In prehistoric times, today’s southern Germany formed the core of the north western alpine Hallstatt culture (ca. 750 – 475 BC). This ran from the Upper Rhine over the source area of the Danube to the east. https://en.wikipedia.org/wiki/Celts

akor and akorIoT
“akor” is the ancient Celtic word for “open”. Harald asked the readers of the first IoT M2M Cookbook what the open reference design should be called. Several readers suggested “OpenIoT”. Since OpenIoT is not very original, an alternative was sought for the word “open”.  Harald then came across the word “akor” via a language researcher in Scotland. The word akorIoT was created. Later, the two-colour logo was introduced.
http://www.gsm-modem.de/M2M/m2m-componets/akoriot-senspro-reference-design-nbiot-ltem/

Harald is currently writing his new IoT M2M Cookbook with a focus on LPWAN. A big chapter will be the planning and simulation of a private LPWAN with free or inexpensive software.  After the simulation, the verification is done with a special LoRaWAN gateway.  This gateway has a constant TX mode and cyclically sends an ID with time stamp. The receiver device with GPS receives the telegram and writes it to a file in RTF format.  This file is then exported to KML and shows the field strength in 6 dB steps.  The new IoT M2M Cookbook becomes the basic instruction manual for a private LPWAN.

Harald Naumann is a recognized IoT evangelist with a primary interest in implementation of wireless applications. He offers over 25 years of professional experience. He comes all the way from Motorola as Service Manager for GSM mobiles and Sales Manager with FALCOM for GSM modules, he was Project Leader and/or Project Member in various teams for wireless based products in telemedicine, GSM locating without GPS or GSM/GPS based tracking devices. Name it “M2M” or even “IoT” today!

He has authored articles in several magazines, runs this blog related to IoT and M2M since 2009 and published the “IoT M2M Cookbook – How to develop a device on wireless modules“ in 2014. Excerpt of the book:
http://www.gsm-modem.de/M2M/m2m_iot_cookbook/

His personal mission: none of his customers should reinvent the wheel. He gladly shares his experience and knowledge with his customers to support their projects. His service for industrial users: products and services for electronic components with most economic concepts and fastest time to market products. If you like to share the experience and knowledge in your IoT or M2M project, please feel free to contact Harald Naumann via